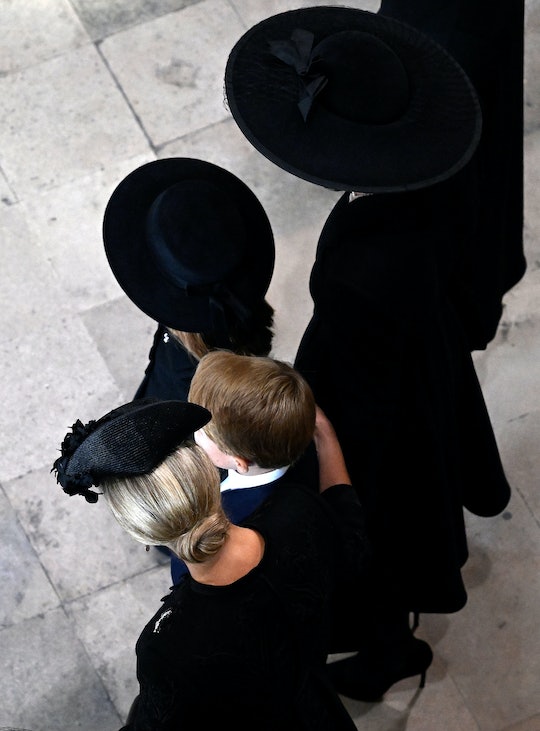 The Countess of Wessex was seen putting her arm around him at Queen Elizabeth’s funeral.

Queen Elizabeth’s state funeral was full of as much pomp and circumstance as you could possible imagine. Millions of people watching around the world, a funeral procession through the streets of London with the Royal Air Force, heads of state in attendance; Her Majesty would have most certainly been touched by this show of love for her from her subjects. But for her family members, it was still a personal and sad event. Sad enough for 9-year-old Prince George to get emotional at the loss of his great-grandmother, and his aunt Sophie, Countess of Wessex, was there to comfort him. Because above all else, the royal family is just that. A family.

Prince George joined his parents, the Prince and Princess of Wales, and his 7-year-old sister at his great-grandmother’s funeral, and it seems as though it was perhaps a bit overwhelming. Who could blame him, Queen Elizabeth’s state funeral is one of the most significant funerals in living memory, a whole lot for a young boy to handle. Especially as he was dealing with the loss of the Gan-Gran he loved so much.

Fortunately mom of two Sophie, Countess of Wessex, who is married to Queen Elizabeth’s son Prince Edward, clearly understood all too well. As the family stood together at Westminster Abbey, she quietly stepped close to Prince George and put an arm around him.

The Countess of Wessex herself has had an emotional time of it during the 10 days since Queen Elizabeth died, so perhaps she understands Prince George on a different level. She has been seen getting teary-eyed at several royal events, especially when her own two children, 18-year-old Lady Louise and 14-year-old James, Viscount Severn, stood vigil at their grandmother’s coffin alongside their royal cousins.

She clearly loves her family and feels this loss deeply, and so can empathize with Prince George, a fellow sensitive soul whose life also changed dramatically when Queen Elizabeth died. He is now second in line to the throne, closer to someday being King of England. And maybe needed a little hug to help him get through the day.