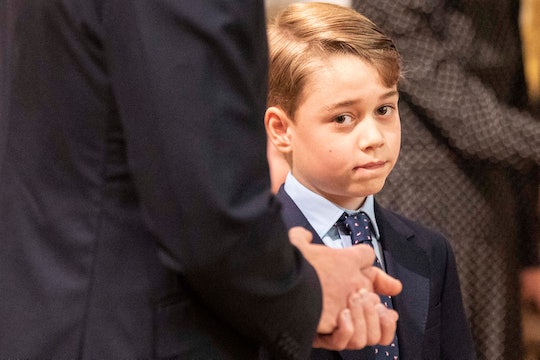 It’s a big responsibility to bear.

Kate Middleton and Prince William have kept their three children as shielded as possible from the realities of their royal futures so far. Both parents have been openly committed to giving them a normal upbringing, going so far as to give them regular chores on the farm in an effort to see them grow up like so many other children. Except, of course, 8-year-old Prince George, 7-year-old Princess Charlotte, and 4-year-old Prince Louis are not really like other children. Especially not Prince George. And it seems now he knows it. His parents have reportedly told him that he will one day be king, and imagine hearing that as an 8-year-old?

Prince George is third in line to the throne behind grandfather Prince Charles and father Prince William. According to royal biographer Robert Lacey, the Duke and Duchess of Cambridge have kept this information away from their oldest son until very recently. And even then, they only sat him down to have the big discussion because they were concerned he might find out accidentally. Lacey wrote in his book Battle of Brothers that Prince William “has not revealed to the world how and when he broke the big news to his son. Maybe one day George will tell us the story himself,” per The Mirror. “But sometime around the boy’s seventh birthday in the summer of 2020 it is thought that his parents went into more detail about what the little prince’s life of future royal 'service and duty' would particularly involve.”

Prince William did talk about his son learning about his monumental role in a 2016 interview with the BBC, and he made it clear he was not ready for it at that point. “I love my children in the same way any father does, and I hope George loves me the same any son does to his father. We are very normal in that sense.” He added at the time, “There'll be a time and a place to bring George up and understand how he fits in, in the world. But right now it's just a case of keeping a secure, stable environment around him and showing as much love as I can as a father.”

The timing seems about right for Prince George; he has been joining his parents on a few more royal outings over the past year. He attended the Euro Cup with them, as well as a rugby match. He and sister Princess Charlotte, who is fourth in line to the throne, also joined their parents at a memorial service for Prince Philip and attended Easter Sunday services. Inch by inch, they seem to be preparing him for his future. What a daunting task it must be.