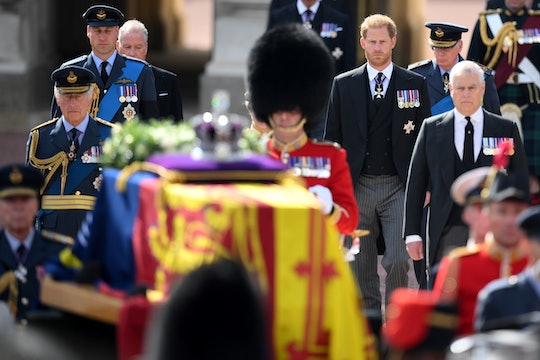 It got underway at 2:22 p.m. for a significant reason.

In the days since Queen Elizabeth died at her summer home of Balmoral Castle in Scotland at the age of 96, her coffin has been making its way back home. First to Buckingham Palace, where a lying in state was observed, and eventually to Westminster Abbey where her funeral will be held on Sept. 19. As the reigning monarch for the past 70 years, the days and hours of official mourning are planned with unmatched precision, down to the last minute. On Wednesday, when her funeral procession made the final journey to Westminster Abbey, the procession left at exactly 2:22 p.m. While Buckingham Palace did not share the reason behind this specific planned time, it seems likely that it had a whole lot to do with her beloved father, King George VI.

When King George VI died in 1952, the bells of Westminster Abbey and the bell of Sebastopol chimed 56 times. The Sebastopol bell is especially notable as it only chimes when a notable senior royal dies, and in this case the bells rang out for every year King George VI was alive. They stopped ringing at exactly 2:22 p.m., according to iNEWS, the same time Her Majesty’s own funeral procession began. A lovely, solemn tribute to the former monarch and, more importantly, the father she loved so much.

Queen Elizabeth’s own family accompanied her coffin on the path from Buckingham Palace to Westminster Abbey including her children and grandchildren, all of whom looked heartbroken to say goodbye.

The timing of Queen Elizabeth’s funeral procession could also be attributed to a quote from King Charles III, her eldest son, who said of his mother in his first national address as sovereign after her death: “May ‘flights of Angels sing thee to thy rest,’” a passage from William Shakespeare. The number 2:22 is also considered to be the number of the angels, according to Bible scripture, as OK! reports, and is symbolic of love, unity, and a reminder that angels are watching over us and keeping us safe.

Whatever the reason behind Queen Elizabeth’s funeral procession leaving at 2:22, it has begun. The final goodbye to a sovereign who put her duty to her country above all else. Her family is with her, and perhaps the angels are with her as well.