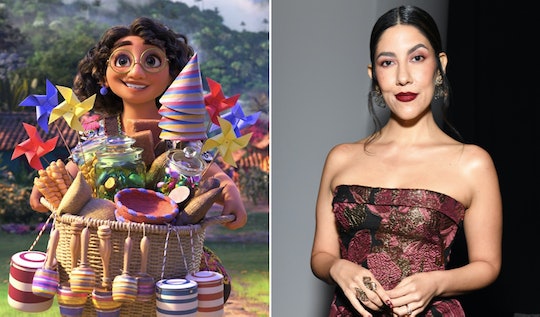 Stephanie Beatriz voiced the character of Mirabel Madrigal, the only member of the family not to possess any magical powers, in Encanto. The Brooklyn Nine-Nine star sang as Mirabel as well, with one song proving to be especially symbolic for her. When Mirabel sings “Waiting On A Miracle” in Encanto, Beatriz was working on her own miracle in real life. She was fully in labor while she recorded that song.

Bearitz opened up in an interview with Variety about recording her voiceover work for the Disney feature film from home. The actress found herself in an especially uncomfortable position; she was scheduled to record Mirabel’s song “Waiting On A Miracle” one day when she went into labor. And she didn’t say a word. “I didn’t want to tell anybody at Disney because I didn’t want anyone to freak out,” Beatriz told the magazine, “but I was already having some contractions when we were scheduled to record that day. I was like ‘Well, fingers crossed I finish the song before [the baby] comes!’”

Now we know finger crossing works. Because Beatriz gave birth to her little girl Rosalind, who she shares with husband Brad Hoss, the very next day, in August 2021. The actress made an announcement via Instagram with a sweet message reading, “I’m very very in awe of the entire experience of having a kiddo. It is INCREDIBLE and HARD AF and BEAUTIFUL and EMOTIONAL, and I can’t remember ever being this amazed and feeling so overwhelmingly full of gratitude. Roz, you are so cool.”

Stephanie Beatriz sang “Waiting For A Miracle” while she was in labor.

Apparently both baby Rosalind and her mom were amazing at keeping their little adventure together under wraps, because director Byron Howard told Variety he had no idea. “We knew she was very, very, very, very ready to have that baby. But she did not tell us she was almost, almost ready.”

The song “Waiting On A Miracle” is of course about Mirabel trying to find her place in the powerful Mirabel family, but some of the lyrics feel beautifully symbolic for a woman in labor, too. “I would move the mountains/Make new trees and flowers grow/Someone please just let me know, where do I go?/I am waiting on a miracle, a miracle.”