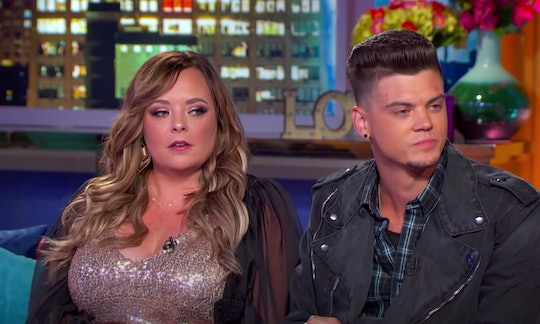 "I am sharing this to know you are not alone."

In a heartbreaking Instagram post shared on Tuesday, it was revealed that Teen Mom OG's Catelynn Lowell suffered a miscarriage on Thanksgiving Day.

"We are all in this together and everyone experiences pain, loss, and the recovery from it, and I am still in the thick of dealing with this loss, as it was recent, and all the emotional trauma that follows a loss in an already horrifically hard year," Lowell wrote in the caption of her post.

The Teen Mom OG star shared with Champion Daily that she and her husband, Tyler Baltierra, found out they were expecting "about three days before Thanksgiving" and that she took six pregnancy tests just to be sure. But just a few days later, things came "crashing down" for them. "I was overwhelmed by sadness and felt my emotions," she told the publication.

Sadly, this is not the first time Lowell has experienced pregnancy loss. In February 2018, Lowell shared that she had suffered a miscarriage during an episode of Teen Mom OG, which captured their emotional reaction on camera. "It was very traumatic," Baltierra told the show's producers at the time, according to Us Weekly.

In her interview with Champion Daily, Lowell said that her previous experience with loss helped prepare her, but it was still, of course, difficult to go through. "It was super early but like I said before it still hurts and all the excitement goes out the window," she said. "This is why we waited to tell Nova...because experiencing one miscarriage in my past I knew it was a sad possibility."

Lowell said in the interview that she is not ruling out having more kids in the future, noting that it will happen "when the time is right." But for now, she is sharing her story with her followers so they know they're not alone. "I opened up about this only to help those who are experiencing the same thing to know that there's someone else every day experiencing this," she wrote in the caption of her Instagram post. "This was painful to share...but again, you're not alone."