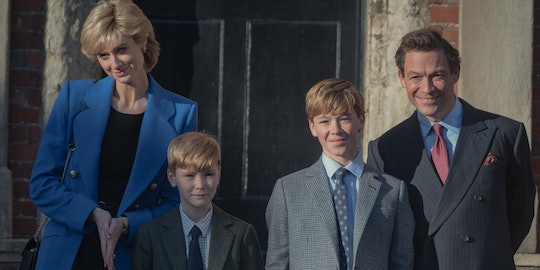 The two apparently had some “uncomfortable” scenes together.

If you have been gobbling up the much-anticipated fifth season of The Crown on Netflix, you know that this season is focused on the embattled royal family during the ‘90s. When Prince Charles and Princess Diana were going through a very public, incredibly messy divorce as their two sons, Prince William and Prince Harry, looked on. And boy does art ever imitate life in this family dynamic. Because Dominic West, the actor playing then-Prince Charles, is actually the father of the young actor playing Prince William, Senan West. And once you see that similarity, you really see it.

West spoke to Town & Country about how his 13-year-old son Senan came to be cast as young Prince William, and it seems it all came together rather accidentally. A casting agent was lamenting to West about struggling to find a 13-year-old blonde, blue-eyed boy to play Prince William and he realized his son, who is one of five children West is raising with wife Catherine Fitzgerald, would fit the bill. Despite the fact that he had zero experience acting.

“Do you know how lucky you are? Bloody lucky!” West recalled telling his son when Senan was acting with Imelda Staunton, who plays Queen Elizabeth in Season 5. “This woman’s amazing. Listen and enjoy and learn.”

There were certain perks to having his real-life son play his onscreen offspring. “What was great,” West told Town & Country, was the “shortcut to a sort of tactile intimacy that you have with your kids that no one else has.” As Senan plays an older version of Prince William on the cusp of becoming a man, the two apparently had some “uncomfortable” scenes together that had West breathing a sigh of relief when his son didn’t sign on to play Prince William in the final season of The Crown.

While Prince William himself has never admitted to watching The Crown, his younger brother Prince Harry spoke to James Corden about the series in 2021. “It gives you a rough idea about what that lifestyle, what the pressures of putting duty and service above family and everything else, what can come from that,” Prince Harry said at the time.

Wouldn’t you love to hear what he thinks of Senan West’s portrayal of his brother?