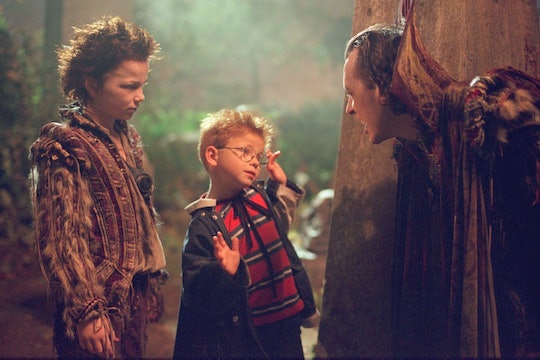 But if you don’t like vampire cows, this isn’t for you.

It can be tough to find Halloween movies that are just scary enough for kids to watch. We all love a little fright from a movie, but not so much that the kids will be up with nightmares all night. While every kid is different, the 2000 live-action movie The Little Vampire just might be exactly right for kids in that difficult in-between zone of 8 to 12 years old. Based on the German book series by Angela Sommer-Bodenburg, The Little Vampire might be just the ticket for a Halloween movie night in. So here’s what parents need to know.

The movie kicks off with a move to Scotland... and vampire pals.

In The Little Vampire, only child Tony (played by the adorable Jonathan Lipnicki having the time of his life) moves to Scotland with his parents. He’s having a tough time making friends at his new school, and he’s not doing himself any favors by constantly talking about his dreams about vampires. Tony insists that he’s seeing vampires every night, along with a vampire hunter. Everyone laughs him off, except it’s true. He eventually makes his first friend in Scotland, child vampire Rudolph (Rollo Weeks), who has his own problems. Namely a ruthless vampire hunter (Downton Abbey’s own Mr. Bates, Jim Carter) who is threatening to ruin Rudolph’s vampire clan before they can find a special amulet that will turn them human again, which is apparently what all vampires really want.

There are some decently scary moments in The Little Vampire including references to dead bodies, a kid being locked in a crypt, and obviously a lot of dealings with the undead. But every time the movie gets scary, with a PG rating, it turns funny. Like vampire cows flying through the air, for instance. And perhaps most importantly, a main character who is never all that scared of anything. That could be the secret ingredient here. Kids might not feel too frightened because Tony never seems too bothered by the vampires. He even calls them “dude” sometimes.

As one 9-year-old reviewer wrote on Common Sense Media, “it isn't that scary when I first watched the movie the first thing that scared me or shocked me exactly was when Rudolph drank cows guts but other than that I love that movie.”

If that’s not a great endorsement I don’t know what is.

Where can you watch The Little Vampire?

If you think your kids are up for a slightly spooky tale of vampires set in Scotland, you can rent The Little Vampire on Apple TV+, YouTube, or Amazon Prime Video. Your kids might thank you for it.