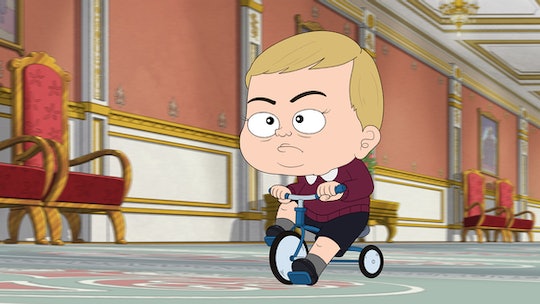 The satirical animated series is now streaming on HBO Max.

If you’ve ever wondered what the world looks like through the eyes of Prince George, third in line to the throne of England and oldest son of the Duke and Duchess of Cambridge, now is your chance. Especially if you were hoping that the 8-year-old was sassy and hilarious and full of attitude. Which he probably isn’t, but that’s the draw of the new animated series The Prince on HBO Max. It’s a totally fictionalized, satirical animated version of the royal family with a twist. And that twist is so totally ridiculous and hilarious and OK yes, a little raunchy.

The Prince Was Created By Gary Janetti

The concept of a sassy little Prince George offering commentary about the goings on of the royal family first came from comedy writer Gary Janetti. He started sharing royal memes featuring a caustic, world-weary Prince George ripping into the rest of the royal family. Like showing a side-by-side photo of Prince George on Instagram with a news feature of his grandfather Prince Charles visiting the throne from Game of Thrones and saying, “That’s as close as he’s ever getting to one.” Janetti’s version of Prince George was so popular, The Prince on HBO Max was born.

Expect To See All Your Favorite Royals

The Prince will take place at Buckingham Palace, with little Prince George interacting with the staff and other members of the royal family like Kate Middleton, Prince William, Prince Charles, Camilla Parker-Bowles, and Queen Elizabeth herself. His younger siblings, 6-year-old Princess Charlotte and 3-year-old Prince Louis, will also be on hand.

As for the royals living in California... the Duke and Duchess of Sussex will not escape The Prince. The new trailer from The Prince sees Prince Harry being confused by his new “apartment palace,” Queen Elizabeth clapping her hands and demanding a treat, and Prince Louis calling out in a deep voice, “Oy! Tea!” and then smashing his cup on the ground.

‘The Prince’ is coming to HBO Max.

You Can Stream The Prince On HBO Max

The Prince starts streaming all 12 episodes of the first season on Thursday, July 29 on HBO Max.

In a word? No. The Prince is a satirical animated half-hour comedy for adults, with lots of swearing and adult situations that are definitely not meant for children.

It Stars Some Big Names

The Prince Has Received Some Mixed Reviews

While there seem to be plenty of people who think the idea of a satirical royal cartoon like The Prince sounds hilarious, not everyone is impressed. Some found the concept “disgusting,” and were particularly concerned that the show was being used to “bully an 8-year-old” boy like Prince George. No member of the royal family has released any kind of comment about the new show yet, perhaps because they know it’s satire.