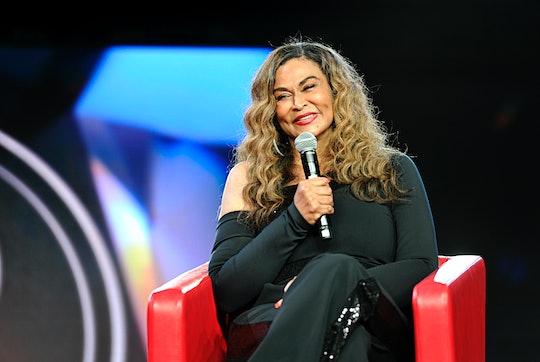 Rumi knows what she likes!

Tina Knowles-Lawson has shared some adorable new details about her youngest granddaughter, Rumi. As it turns out, Beyoncé and JAY-Z’s 5-year-old daughter is already a little fashionista, but is anyone really surprised?

In a new interview with Oprah Daily, the House of Deréon founder and Talks With Mama Tina host revealed that Rumi loves fashion. “She picks out her own clothes,” Knowles-Lawson shared about her 5-year-old granddaughter, and went on to tell a story about a recent trip the family took to Disneyland.

“We recently went to Disneyland, and she put on her Mickey Mouse shorts,” the proud grandmother shared in the same interview. “Then she wanted to put on a sparkly printed top, which had the same colors. It actually looked really cute.”

Her big sister, 10-year-old Blue Ivy, was apparently not a fan of the outfit and had a few words to say about it, which Rumi had a cute clap-back for her. “But her sister came in and Blue was like, ‘My mom would be mad because she’s doing too much.’ And Rumi said, ‘This is my style,”’ Knowles-Lawson recalled.

It’s not just Beyoncé’s daughters who love fashion. Knowles-Lawson also revealed to Oprah Daily that all of her grandchildren — Blue, Rumi’s twin brother Sir, and her daughter Solange’s son, Daniel Julez J. Smith Jr. — are “little fashionistas” and have “definite determination about what they like and what they don’t like.”

In fact, according to their grandma, the kids even shared their input on Beyoncé’s latest Ivy Park line, Ivytopia, which also includes children’s apparel. “Kids like things that are comfortable. They don’t want anything that’s scratchy or too tight or high around the neck. So they absolutely give input on the brand,” Knowles-Lawson told Oprah Daily.

Fashion seems to be a central part of their lives. Just last year, Sir, Rumi, and Blue were all featured in their mother’s previous Ivy Park campaign.

While updates about her youngest grandkids are pretty rare, Knowles-Lawson has gushed about their adorable personalities. “They’re so different, and their personalities, and they are wonderful,” she shared with Us Weekly in 2020, adding that Sir “has a stare, like a mean mug, like Jay sometimes, which is so cute,” and that Rumi, “she’s just so happy all the time and so sweet. They are just adorable!”

Thanks to Grandma Tina’s updates, it sure sounds like Rumi and Sir are really growing into their adorable personalities.