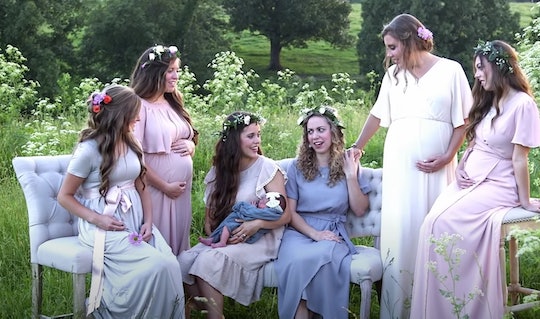 “TLC feels it is important to give the Duggar family the opportunity to address their situation privately.”

After 11 seasons and nearly six years on air, TLC has canceled Counting On roughly two months after Josh Duggar was arrested. The oldest Duggar son taken into custody by Homeland Security in late April and indicted on two charges of receiving and possessing child pornography. He pled not guilty to both charges and is currently awaiting trial, which has been scheduled for Nov. 30.

“TLC will not be producing additional seasons of Counting On,” the network told People in a statement. “TLC feels it is important to give the Duggar family the opportunity to address their situation privately.”

Counting On, which first aired in 2015, focused on the lives of the oldest Duggar children as they got married and started families of their own. Jinger Duggar, 27, and her husband, Jeremy Vuolo released a statement on Instagram on Tuesday, voicing their support of TLC’s decision.

“We wholeheartedly agree with TLC’s decision not to renew Counting On and are excited for the next chapter in our lives,” the couple wrote. “We’d like to thank our fans, friends, and the amazing film crew who have shown us love and support.”

Jim Bob and Michelle Duggar previously released a statement following Josh’s arrest. “It is our prayer that the truth, no matter what it is, will come to light, and that all of this will be resolved in a timely manner,” the statement read. “We love Josh and Anna and will continue to pray for their family.” Romper has reached out to the Duggar family for comment regarding the show’s cancelation.

TLC canceled the Duggar’s first reality show, 19 Kids & Counting in 2015, after allegations surfaced that Josh had “inappropriately touched several minor girls,” according to ABC News. At the time, the Duggar family wrote in a statement that they were appreciative of the opportunity to share their story with a larger audience. “Our desire in opening our home to the world is to share Bible principles that are the answers for our life’s problems,” they wrote. “With God’s grace and help [for] Josh, our daughters and family overcame a terrible situation, found healing, and a way forward.”

The Duggar siblings returned to TV a few months later with a new series, Jill & Jessa: Counting On, which was later renamed to just Counting On, focusing on the oldest Duggar children. Josh did not appear on the TV show, although his wife, Anna, and their six kids occasionally made an appearance in episodes over the course of the past 11 seasons.

Following this cancelation, Counting On fans can continue to follow along with the Duggar siblings on their various social media platforms. Jessa Duggar has a YouTube channel where she frequently posts videos about her three kids and their family adventures. Jessa’s younger sister, Joy Anna Duggar and her husband, Austin Forsyth, also vlog their family outings with their two adorable kids on YouTube. Additionally, old episodes of Counting On are available on Discovery+.

More Like This
Prince Harry & Meghan Markle Could Take Us Inside Their Home For A New Docuseries
Jennifer Lawrence Just Kinda, Sorta Revealed The Sex Of Her First Baby
24 Photos Of Princess Charlotte Making Silly & Cute Faces
13 Celebrity Parents Who Also Raise Chickens At Home