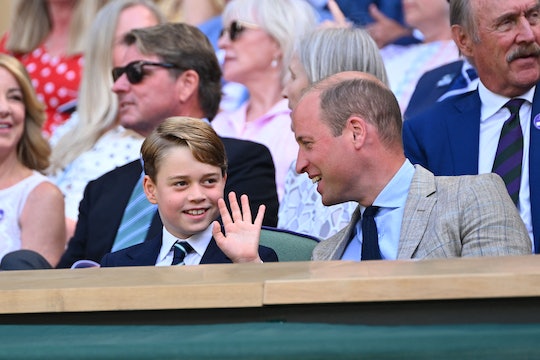 He got to hold his trophy too!

Prince George joined his parents at Wimbledon over the weekend, and he looked to be quite the pulled together young man. He sat between Kate Middleton and Prince William on the sidelines of a match at Centre Court for the Men’s Singles final between Nick Kyrgios and Novak Djokovic, dapper in his suit and tie. But when the match was won by Djokovic and it was time for him to meet the champion, Prince George became a typical 8-year-old boy again and got adorably awkward.

The Duke and Duchess of Cambridge are regular fixtures at Wimbledon in their royal box, of course, but this year marked the first time the pair brought their oldest son along with them. For the duration of the match, noted sports fan Prince George sat politely in his seat in the hot sun watching the professional tennis players. After the match, the 8-year-old went to congratulate the seven-time champion Djokovic with his parents, and that one-on-one meeting saw him getting a little overwhelmed.

Prince William told Djokovic that it was Prince George’s first time at Wimbledon, and the champion asked if he liked it. When Prince George gave him two thumbs-up, he let him hold his trophy. “Don’t drop it!” Prince William joked like a classic dad in a video of the moment. Prince George eventually handed it off to his mom. Even when you’re a duchess you end up holding things for your kid.

After the meeting, the BBC captured Prince George’s reaction to meeting the tennis legend. He walked away from his parents with his hands covering his face in the universal language of childhood embarrassment. Meeting a tennis legend will do that to you.

Although to be fair, this is not the first tennis legend Prince George has met. The future king, who has been playing tennis himself for several years, actually played against Roger Federer back when he was just 5 years old, according to Middleton. The legendary tennis player was reportedly helping him work on his game at the time, so Prince George could presumably be an amazing player by the ripe old age of 8 years old. The family even has their own private tennis court at their Norfolk county home of Anmer Hall.

There’s something genuinely lovely about the fact that Prince George, despite his prestigious royal standing, is really just a kid who gets awkward around adults. Who can blame him?