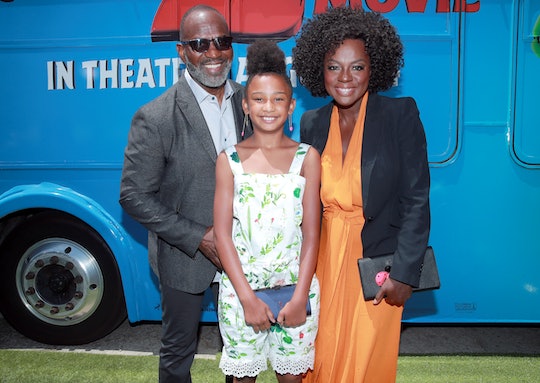 Now she’s a parent herself.

Viola Davis is known for portraying powerful women, from a hardcore attorney in Shonda Rhimes’ ABC hit series How To Get Away With Murder to legendary blues musicians, such as Ma Rainey in 2020’s Ma Rainey's Black Bottom. And soon, the Oscar-nominated actress will take on her most iconic role to date as First Lady Michelle Obama in the drama series The First Lady. Like our former first lady, Davis is a wife and mother. Over the years, she’s spoken lovingly and candidly about her family.

Her husband, Julius Tennon, is also an actor.

Davis met her husband Julius Tennon on the set of the medical drama series City of Angels in 1999 and the two married in 2003. In a 2013 interview with Page Six, Davis explained that at the time she met Tennon she was “the loneliest woman in the world” and that someone told her to pray for the type of man she wanted as a husband.

“I said I wanted a big Black man from the South who looked like a football player, who already had children, who maybe had been married before,” Davis told Page Six. Her prayer was answered three and a half weeks later when she met Tennon.

Tennon, who is also a former football player, has starred alongside his wife in several projects such as the 2014 movie Get On Up and the 2015 crime thriller, Lila & Eve. Both are also co-owners of their production company, JuVee Productions.

Tennon is also the father of two adult children, Sheavonda Diana and Duriel Dwight, whom he shared with his first wife, who passed away in 2006.

The couple adopted their daughter Genesis in 2013.

In 2013, Tennon and Davis adopted their daughter, Genesis Tennon. The preteen, now 11, seems to be following in her parents’ footsteps and has picked up a feel for acting. In 2019, she made her first acting debut in The Angry Birds Movie 2 alongside her dad who voiced the character of Vivi. Two years later, she made her debut as a model, posing with her mother on the cover W Magazine's Director Issue.

Genesis is also known to be a huge Harry Potter fan. Her 11th birthday party was magically themed after the hit movie and books.

As her mother, Davis works to empower Genesis on her self-worth. Davis spoke about the transparency she shares with her daughter in an August 2021 interview with People. “I'm the mom who says ‘you're good enough wherever you are but there's going to be times when you don't feel good enough,’” Davis told the magazine. “I have the courage to tell her that she's going to make some big old bonker mistakes and that mommy is just not going to have the answers and sometimes you're not either.”

Davis added, “I'm not the mom that's gonna just tell her a bunch of lies about life because I want her to be the best woman in the room.”

Her mother is her ‘heart and soul’

Viola may have had a TV mom in late actress Cicely Tyson but no one compares to the real deal. Her mother, Mary Alice Davis, is like an extension of the actress. Davis worked as a maid and factory worker. Viola is her second youngest of six children.

Davis’s mother was also an activist. Growing up, the young Viola would attend protests with her.

“She would bring us to these protests," Davis recalled one incident for AARP The Magazine. “One, in particular, was at Brown University. The police threw us in the paddy wagon, and I was crying. I was 5 or 6 years old. I was a crybaby!"

And her mother is still alive and kicking. For her birthday last year, the actress penned heartfelt Instagram note to her mom, calling Davis her ‘heart and soul.’

“My MAMA!!!,” she posted a picture of the two of them. “God broke the mold Mae Alice! I love,love,love you.”

Her father was abusive

Like most of us, part of who makes Davis the woman she is today is largely due to her upbringing. In her memoir, the Fences actress wrote about the emotional and physical abuse she and her mother, Mae Alice, endured by her father, Dan Davis, as a child.

But before he died of pancreatic cancer in 2006, Davis was able to find it in her heart to forgive him. “I wanted to love my dad,” she wrote, as reported by People. “And here's the thing: My dad loved me. I saw it. I felt it. I received it, and I took it. For me, that's a much better gift and less of a burden than going through my entire life carrying that big, heavy weight of who he used to be and what he used to do. That's my choice. That's my legacy: forgiving my dad.”

Davis also told the New York Times that working on the relationship with her father took years of therapy and towards the end, his days were spent “catering to the needs of his wife and family.”

During his life, Mr. Davis worked as a horse groomer.

She learned compassion from her parents.

Also what helped in the process was the strength of her mother, who also forgave her father and stayed with him for 48 years until he died.

“It's given me an extraordinary sense of compassion,” Davis said. “It's reconciling that young girl in me and healing from the past — and finding home.”

More Like This
Kate Middleton Explains Why Her Kids Couldn't Attend The Top Gun: Maverick Premiere
20 Memorial Day Movies To Watch As A Family This Year
Meghan & Harry Celebrated Their Anniversary As A Family Of Four For The First Time
MGK Shared An Emotional Tweet After Dedicating Song To “Wife” & “Unborn Child”