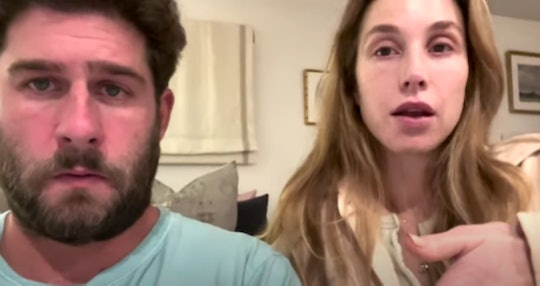 Whitney Port Shares She Suffered A Miscarriage In A Candid Post

“The doctor didn’t hear a heartbeat.”

Two weeks after Whitney Port shared with her YouTube followers that she was seven weeks pregnant, saying at the time that it was “likely another unhealthy pregnancy,” The Hills star took to her Instagram Story with a heartbreaking update. In a candid post on Wednesday, Port shared that she suffered a miscarriage and sent her love to others experiencing loss as well.

“I'm so sad to say this, and some of you may have watched on our latest YouTube episode, but we lost the baby,” Port wrote in the post. “We found out yesterday, I don't even really know what to say here. I recorded a full verbal diary of all my thoughts and emotions last night that I'll put out on my podcast next week.”

“Sending all my love to those of you dealing with this right now,” she continued. “And I don't want to be insensitive by making light of it, but glass half full — I don't physically feel like complete sh*t anymore.”

Port explained in a YouTube video also posted Wednesday that she discovered she had miscarried her most recent pregnancy after she went in for an ultrasound and the “doctor didn’t hear a heartbeat.” The television personality also noted that “whatever was happening in there was not where it was supposed to be, given the week that I'm at.”

Port and Rosenman are parents to 4-year-old son Sonny Sanford Rosenman, and the couple have struggled with several miscarriages in the past few years. In 2019, Port experienced her first pregnancy loss and admitted at the time that the experience left her feeling that her “identity has been shaken in regards to who as a mom and human being.” In January 2021, Port suffered another miscarriage when the couple was going through home renovations, and it was an especially difficult experience for Port. “Last time, I don't think I was ready to have another child, and I had different feelings about the miscarriage," she shared on Instagram at the time. "This time, I really connected. I was actually excited and enjoying the pregnancy. I envisioned it all. I’m sad but I’m ok and we will try again."

This time around, Port shared that she and Rosenman have been advised by their doctor to seek fertility treatment if they hope to have another child, which seems likely as the tearful mom admitted in her YouTube video that “the thought of just not having a second kid is too painful to bear.”