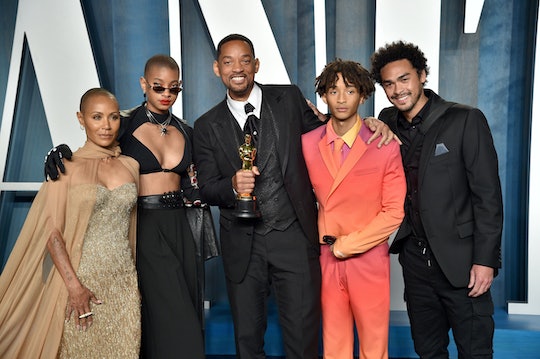 Jaden Smith has spoken out in a show of support for his father, Will Smith, following the heated exchange between him and Chris Rock at the 94th Academy Awards Sunday night.

“And That’s How We Do It,” the 23-year-old tweeted on Sunday. Jaden was also photographed with his father, mother, sister Willow, and brother Trey at the 2022 Vanity Fair Oscar Party in Beverly Hills.

Jaden’s tweet came shortly after the viral incident at the Oscars. While presenting an award on stage, Rock jokingly commented on Jada Pinkett Smith’s shaved head. “Jada, I love you. G.I. Jane 2, can’t wait to see it,” he joked.

The Red Table Talk host seemingly rolled her eyes at the comment and the King Richard actor then walked onto the stage and smacked Rock across the face. “Keep my wife’s name out your f*cking mouth!” Smith yelled at Rock after taking his seat again.

“Wow, dude, it was a G.I. Jane joke,” Rock said. Smith replied once again, “Keep my wife’s name out your f*cking mouth!”

In May 2018, Pinkett Smith revealed she has alopecia, an autoimmune disorder that leads to hair loss. “It was terrifying when it first started,” the Maryland native talked said during a May 2018 episode of her Facebook Watch series, Red Table Talk. “I was in the shower one day and had just handfuls of hair in my hands and I was just like, ‘Oh, my God, am I going bald?’”

Smith’s slap has seemingly overshadowed the actor’s first Academy Award win for Best Actor for his role in King Richard. Smith later acknowledged the exchange during an emotional acceptance speech.

He jokingly added, “Art imitates life: I look like the crazy father. Just like they said about Richard Williams. But love will make you do crazy things.”

Smith then went on to apologize to the Academy and his fellow nominees for his actions. “This is a beautiful moment and I’m not crying for winning an award,” he said. “It’s not about winning an award for me.”

In another tweet, which has since been deleted, Jaden made shared a photo of himself wearing sunglasses in the backseat of a car and wrote, “My Dads Speech Made Me Cry.”

While the moment between Smith and Rock continues to spark conversations and questions, neither Pinkett Smith nor Rock has commented further on the incident.