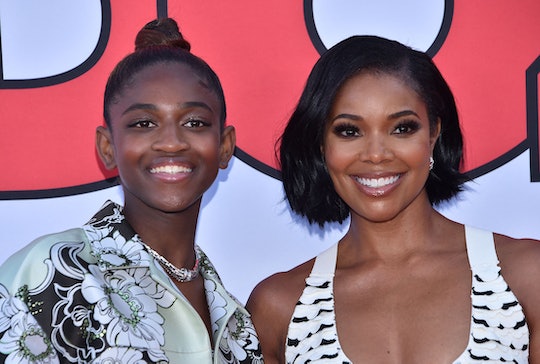 As Gabrielle Union Put It, She's A "Vision"

Zaya Wade is rocking a gorgeous new look. Over the weekend, the teen debuted her new long hair in a series of stunning images for a campaign with Tiffany & Co. and as her stepmother Gabrielle Union commented on the post, Zaya is “a vision.”

In addition to Union, Zaya’s friends and fans quickly took to the comments to share how much they loved her new look. Star actress Ryan Destiny commented under her post, “Beauty.” Bunk'd actress Skai Jackson wrote, “Yes sis!! Love this.”

Zaya is the daughter of retired NBA star Dwyane Wade, who recently filed paperwork to legally change Zaya’s name, roughly two years after announcing she is transgender in 2020. Over the past couple years, Zaya, as well as her parents, have become proud, vocal advocates for trans youth and the LGBTQ+ community. “Being my full authentic self feels like freedom. Being out and open and truthful about who I am to myself and others is just freeing,” Zaya shared with the TODAY Show in June. “It’s a beautiful feeling to have and hold and to be able to share with the rest of the world.”

Zaya has previously opened up about the importance of living your truth. In a video shared by Union in 2020, Zaya told her followers, “To anyone who is afraid they’re going to be judged, I would say don’t even think about that. Just be true to yourself, because what’s the point of even living on this earth if you’re going to try to be someone you’re not? It’s like you’re not even living as yourself.”

When she’s not using her platform to call out transphobia or inspiring others, Zaya is already adding impressive gigs to her résumé at just 15 years old. Indeed, Zaya is the second, most recent popular face to grace a campaign for Tiffany & Co. Last October, Beyoncé, JAY-Z, and Blue Ivy were spotlighted in the company’s “About Love” campaign. In it, Beyoncé sported Tiffany's legendary 128.54-carat diamond, which made her the first Black woman ever to wear the iconic diamond.

As for Zaya, the teen is carving out her own diamond path. She has modeled for brands such as Gucci, Fendi, Stella McCartney and Bey’s Adidas x Ivy Park Ivytopia collection. She’s also shared in story in outlets such as Teen Vogue and most recently, i-D. At the end of the day, though, Zaya is also just a kid with a dad who can’t help but crash her photoshoots.