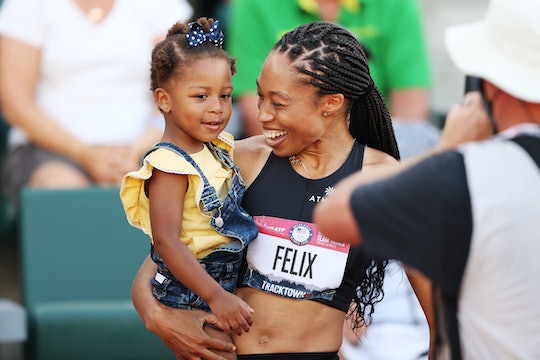 There is no doubt that Allyson Felix was one of the standout stars of the Tokyo Olympics. She became the most decorated American track and field athlete in Olympic history, winning her seventh gold medal for the 4x400-meter relay to add to her three silvers and one bronze. She managed to make history as a 35-year-old mom competing at her fifth Olympic Games, which made Felix’s reunion with her daughter after the Tokyo Olympics even sweeter.

Felix herself has been open about her difficult path to compete this year, her first Olympics as a mother. When she won a bronze medal in the women’s 400 meter race last week, she admitted to reporters that it was “a fight to get here” after welcoming her daughter Camryn in 2018 via C-section and being hospitalized for preeclampsia. “Hopefully, a lot of mothers will see themselves in me,” she told reporters after her win. “I just want to be that inspiration.” She continued to inspire at the Tokyo Olympics, winning the gold medal that made her the most decorated American Olympic track and field athlete ever.

Of course, one of the people who finds her the most inspiring was waiting for her at home. With balloons, a smile and, a message of her own. “I missed you,” little Camryn said in a video shared on Felix’s Instagram, then pointing to the decorations, “I made you these.” And best of all, a little compliment, “I like you glasses.”

Bringing Camryn into the world has changed Felix as a woman and an athlete. She famously spoke out against Nike for its treatment of pregnant athletes in a 2019 op-ed for The New York Times despite her concerns about what it might do to her career, all because she wanted to make the world a better place for her daughter. “Becoming a mom — it shifted my focus to thinking about this world that my daughter will grow up in,” Felix told Romper. “I don’t want her to have the same battle. [Motherhood] gave me that final bit of push that I needed and helped me find my voice so that I could speak on these very important issues.”

Now Felix is home after an incredible triumph at the Tokyo Olympics. Camryn is still too young to understand the significance of this homecoming. That she is being held in the arms of a mother who fought harder than most to become a champion. That she fought for her daughter. In Camryn’s eyes, it’s just nice to have her mom back. Which is as it should be.

More Like This
Megan Fox Explains Why She Asked Machine Gun Kelly If He Was Breastfed As A Baby
Sarah Levy Reveals Birth Of Her Baby Boy & His Name Is A Sweet Tribute To Her Dad
Barack & Michelle Obama Shared The Most Adorable Baby Photos Of Malia On Her Birthday
Catherine Reitman Calls It Like She Sees It: “Being A Working Mother Is Impossible”