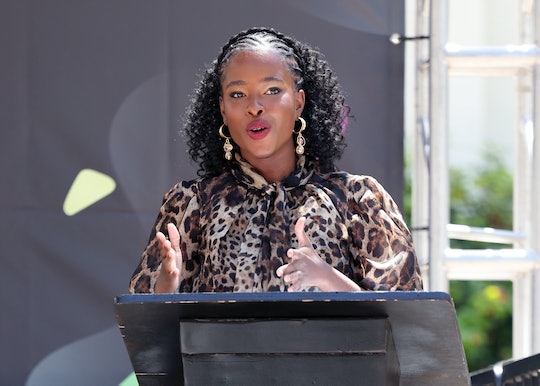 “The truth is, one nation under guns.”

On Tuesday, a lone gunman walked into Robb Elementary School in Uvalde, Texas and opened fire on young children. Before he was fatally shot by law enforcement officials, the shooter managed to kill 19 children and two adults. The survivors, also children, are now left to remember that terror for the rest of their lives. It is difficult to know what to say in the wake of such a monumental loss, which is perhaps one reason why Amanda Gorman’s poem on the Texas school shooting has gone viral. She has allowed us all to borrow her words and put them into action. Because it is the inaction, over and over again, that needs to change.

The first National Youth Poet Laureate, who delivered a moving poem at President Joe Biden’s inauguration in January 2021, took to social media to share her passionate poem hours after the world first learned of the horrific shooting in Uvalde. In a series of tweets, Gorman unfurled her poem:

The truth is, one education under desks,

That plunge when we ask Where our children

Gorman shared her poem on Instagram as well, where she asked for donations to Everytown for Gun Safety with the caption, “Americans—you know enough is enough. If you do anything today, let it not be just to grieve, but to act. Follow & donate to @everytown to help prevent gun violence and save lives, and check out their website (everytown.org) to take more action.”

Social media users reached out to Gorman to thank her, as actress Rachel Brosnahan noted on Instagram, “grateful for your words when words feel impossible.” Another person wrote, “You say the truth so beautifully. I wish the powers that are will listen. One day we will be in a better world,” while this social media user added, “thank you, amanda. your words cut deep and help the broken heart. we need to do more.”

As Gorman so eloquently put it, “what might we be if only we tried.” Now is the time to try. And succeed.

More Like This
Robb Elementary School Is Set To Be Demolished After Deadly Shooting
Lauren Conrad Shares Experience With "Lifesaving Reproductive Care" After Ectopic Pregnancy
Meghan Markle Calls On Men "To Be Vocal" In The Aftermath Of Roe v. Wade Ending
Family Of Grandfather Killed In Highland Park Mass Shooting Say He "Saved" Their Lives