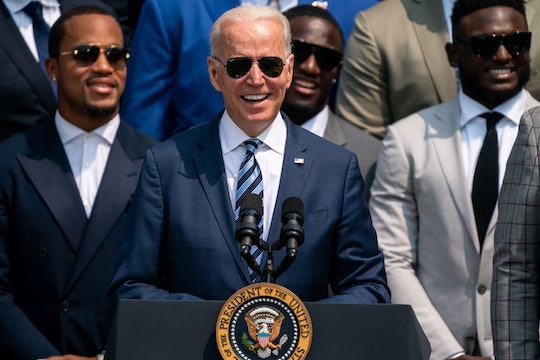 President Biden is the latest commander-in-chief to be given an animatronic likeness at the Happiest Place on Earth.

The presidential inauguration is nice and all, but nothing is more official than having your likeness recognized by Disney. As the 46th President of the United States, President Joe Biden will be the latest commander-in-chief to be inducted into the Hall of Presidents At Walt Disney World next month.

Disney shared in a blog post this week that the theme park has been working for the past few months to add Biden to the Hall of Presidents At Walt Disney World exhibit and they’re almost finished. Biden is expected to make his debut on the stage this August, according to Thomas Smith, editorial content director for Disney Parks, said in the blog post.

“Since opening day of Magic Kingdom Park in 1971, The Hall of Presidents has brought to life the heritage of the United States and shared the symbolic importance and uniqueness of the office of the President. Almost 50 years later, the story of liberty’s leaders continues to be told and retold to new generations as Walt Disney originally envisioned,” Smith said. “... As Disney Imagineers are putting the final touches on the show, which will debut to guests in August, we’re sharing a behind-the-scenes look at the latest update.”

Photos shared by the park show that guests can expect to see the animatronic Biden in a tailored suit standing forefront in the presidential tableau. Next to him will be a table with items that are significant to the president, such as peach blossoms to represent his home state of Delaware and a pair of aviators to symbolize his love of the sunglasses.

During the 25-minute show next month, the Biden replica will recite the presidential oath of office, which was recorded at the White House by President Biden himself earlier this year.

As for the animatronic replica of former President Donald Trump, it will be moved to another spot in the tableau since his term is over. “For those who are curious about what happens to presidents at The Hall of Presidents after their term has ended, the Audio-Animatronics figure of former President Donald J. Trump will take its place on stage among those who have previously served,” Smith explained in the blog post. Back in 2017, a petition was launched to keep the animatronic Trump silent, but it failed. Once Biden is introduced to the display, Trump’s replica will stand in the background among fellow commanders-in-chief such as former Presidents Abraham Lincoln and Barack Obama.

Folks are pretty excited for the latest addition to the Hall of Presidents, especially the attention to detail. “The aviators are a pretty cute touch,” one person tweeted under the Disney Blog post. Meanwhile, Amtrak tweeted, “Those documents on the table sure do look familiar,” referring to the Amtrak tickets on the display table and Biden’s love of the train. (Fun fact: Biden loved riding Amtrak so much earlier in his career that he’d been nicknamed “Amtrak Joe.”)

President Biden has not commented on his latest honor yet, but let’s just hope that if/when he visits it himself he’ll wear a pair of Mickey Mouse ears.