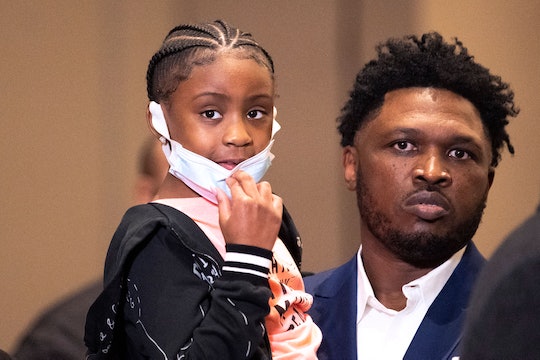 “I told her this afternoon, ‘Daddy did change the world.’”

President Joe Biden and George Floyd’s daughter can agree on one thing: her daddy changed the world. Soon after a jury found former Minneapolis police officer Derek Chauvin guilty of murder, the president made a televised speech and shared that he had spoken to 7-year-old Gianna Floyd.

“She said to me, and I’ll never forget it, ‘Daddy changed the world,’” Biden recalled of their first conversation at Floyd’s funeral last year. “I told her this afternoon, ‘Daddy did change the world.’ Let that be his legacy.”

Last summer, Gianna went viral after a video of her declaring “daddy changed the world” was shared on Instagram. In the clip, she is sitting on the shoulders of her father’s friend, Stephen Jackson, during one of the many demonstrations over her father’s murder. “He did what,” someone off-camera asked the then-6-year-old. Gianna replied again, “Daddy changed the world.”

Floyd reportedly had five children; Gianna was his youngest. In an interview with ABC’s Good Morning America last year, she described her daddy as a fun and loving man. “I miss him,” she said. “He played with me.” During that same interview, Gianna’s mother, Roxanne Washington, said Floyd was a great dad who loved his daughter. “That was his baby,” Washington said. “He loved his little girl.”

In an emotional video posted on Instagram last June for Father’s Day, Gianna shared more memories of her dad. “When I was a little baby, dad would do everything for me. Like change my diaper and feed me all the time and put me to bed,” Gianna said. “When it was time for my birthday to happen when I was a baby and it was time for my birthday, he would take me to Chuck E. Cheese and he would let me play all the games. He was strong and good to me and he was fun. He’s always going to be fun.”

The 7-year-old has her own Instagram page with over 85,000 followers. She’s also received a full scholarship to Texas Southern University, which should help her with her career aspirations. During the GMA interview last June, she expressed interest in wanting to become a doctor.

In June of last year, a GoFundMe page was set up for Gianna. So far, over $2.3 million has been raised to aid Gianna’s future, which is promising to be bright indeed. And her daddy will be with her every step of the way.