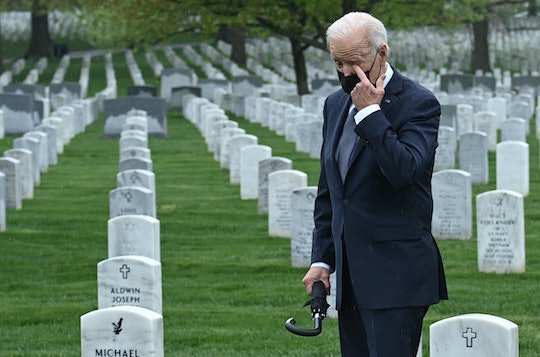 “I have trouble these days ever showing up at a cemetery not thinking of my son Beau.”

During a recent visit to a Veteran’s Cemetery, President Joe Biden tearfully spoke about his son Beau Biden, who died of brain cancer in 2015, and admitted that he frequently has a tough time visiting cemeteries without “thinking of my son Beau.”

More Like This
The Obamas’ New Family Rule? Get Vaccinated If You Want To Hang Out With Us
Prince Harry’s Famous Dad Friend Warned Him About Paparazzi In Their Neighborhood
Max Greenfield's Son Ozzie Is Every Kid In This Hilarious "Teacher Appreciation" Photo
Help Dad Celebrate His First Father's Day With These Gifts

The president visited Arlington Cemetery on Wednesday almost immediately after he officially announced that the United States would finally be withdrawing military troops from Afghanistan by Sept. 11, 20 years after the terrorist attack on U.S. soil saw troops deployed. Biden spoke openly about his struggle visiting Arlington or any cemetery, for that matter, without being reminded of the painful loss of his son Beau, particularly as he was a veteran himself.

“I have trouble these days ever showing up at a cemetery not thinking of my son Beau, who proudly insisted on putting on that uniform and going with his unit to Iraq and giving up his spot as attorney general in the state of Delaware because he thought it was the right thing to do,” President Biden said.

Beau served in the Middle East from 2008 until 2009, earning a Bronze Star Medal for his service while delegating his duties as Attorney General of Delaware. He is currently buried at St. Joseph on the Brandywine Cemetery in the Biden’s home state of Delaware alongside his mother Neilia and sister Naomi, both of whom died in a car crash in 1972. This was the cemetery Biden visited on Election Day 2020, taking time at the grave of each of his lost loved ones. Two of whom were his children.

The loss of his son Beau has deeply affected President Biden over the past five years, and he has been refreshingly open about that loss. On Jan. 20, the day before he would be sworn in as the 46th President of the United States, he teared up as he prepared to depart from Delaware for Washington, D.C. "I am proud. Proud, proud, proud to be a son of Delaware. And I'm even more proud to be standing here doing this from Major Beau Biden. I only have one regret. That he's not here. Because we should be introducing him as president."