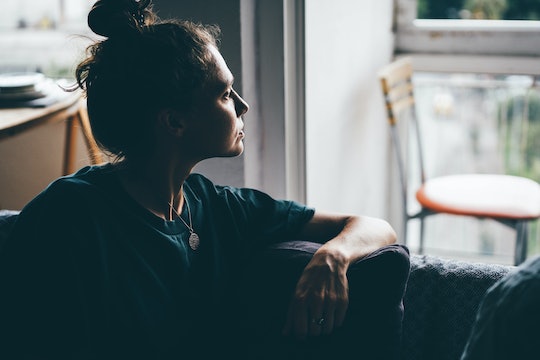 Try not to stress.

For many women, it's not until you start trying to conceive that you become hyper aware of your body, your cycle, and how that might affect your chances of conception. Like, has your period always been irregular, or can trying to conceive cause irregular periods? Once you're constantly watching your cycle and trying to time sex, noticing a period change after you’ve started trying to conceive may feel unnerving. But experts say there are actually other factors to consider.

If it seems like you’ve had period changes after trying to conceive, here’s what’s going on

Sometimes hormonal medications taken to stimulate ovulation — such as Clomid or Follistem — could make your period a bit irregular, too, says Dr. Idries Abdur-Rahman, an OB-GYN.

Other things that can lead to irregular periods, according to Abdur-Rahman ,include hormonal causes — such as hypothyroidism and polycystic ovarian syndrome — or vaginal and cervical infections, or structural issues with your uterus, including fibroids or polyps. “The most common causes of irregular periods are broken down into those that cause oligomenorrhea — reduced bleeding, i.e., shorter, more spaced-out periods — and those that cause polymenorrhea — increased bleeding i.e. longer, heavier, more frequent periods,” he says. Oligomenorrhea is usually due to hormonal issues and polymenorrhea is usually due to the structural issues, polyps, fibroids, or infection, he adds.

Defining a ‘regular’ period can be tricky

Before you start freaking out, make sure your definition of “regular” is on par with your doctor's. You might think you're not regular if your cycle is off by a few days, but most women's cycles are not perfectly identical every month. When your doctor asks if you have regular periods, they’re likely just making sure it's within the same range each month, and not every two weeks or every two months.

Abdur-Rahman says doctors will gauge a “normal” period as lasting three to eight days, and that it should come every 21 to 35 days. But this is the “textbook definition of normal,” and the average is typically 28 days between periods, with periods lasting four to five days.

“By definition, a period is irregular if it comes more than every 21 days or if there is more than 35 days between periods on a regular basis. Every once in a while, a period may come a few days early or a few days late or it may be longer or shorter than usual. Periods are only considered irregular and are of concern if the irregularity occurs more than 3 months consecutively,” Abdur-Rahman says.

Tracking your periods may increase your chances of getting pregnant

If you're concerned about trying to conceive while your period is seemingly irregular, there are a few tools that can help you out. Charting your cycle, keeping an eye on your cervical mucus and basal body temperature, and using ovulation predictor kits can all give you a better idea of when you are about to ovulate. While tracking your cycle, you may even realize that your period is within the average range of normal. Additionally, Abdur-Rahman says he always recommends to his patients a simple smartphone period/ovulation tracker. “Period/ovulation trackers will not only keep track of when you are having your period, but they also approximate when you should be having your period and help you to identify any irregularities — i.e. too often, too few, too long, or too short. A period tracker will also identify your most fertile days,” he says.

“If you are trying to get pregnant and you are not having regular periods, you should see your gynecologist to discuss evaluation and treatment,” Zertuche says. It's best to rule out any possible complications, particularly as you get close to conception.

Trying to conceive is not always an easy process, and many times irregularities may be nothing. In the case that they are a sign of a health-related issue, it's always better to be proactive. Keep your doctor in the loop with anything that comes up while you try to conceive — they can recommend you the best approaches moving forward.

Dr. Idries Abdur-Rahman, OB-GYN, author of Everything You Ever Wanted to Know About Pregnancy (But Were Too Afraid or Embarrassed to Ask, and one-half of the Twin Doctors from TwinDoctorsTV.

More Like This
Diastasis Recti Exercises You Can Do At Home To Heal Your Abdomen
Is Raspberry Leaf Tea Safe To Drink During Pregnancy?
Dealing With Postpartum Back Pain? Physical Therapists Share Their Tips
Is Vape Smoke Bad For Pregnancy? Experts Explain The Risks
What Parents Are Talking About — Delivered Straight To Your Inbox

This article was originally published on Oct. 14, 2017