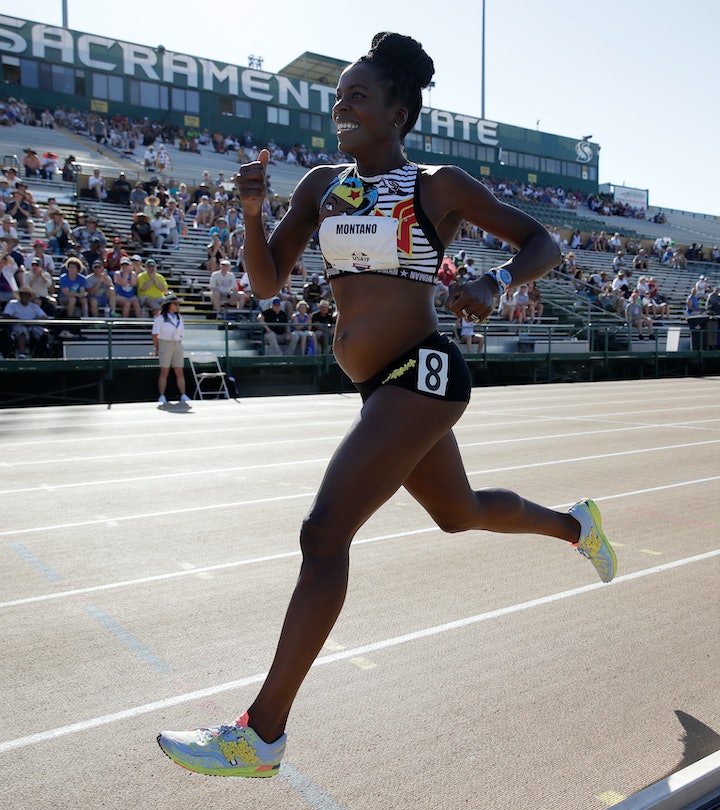 Pregnancy Doesn't Have To Stop Olympians From Competing

Unless, I guess, you’re due in a week and want to bobsled.

In case you missed the memo, women are all kinds of amazing. Whether they are bosses, making a name for themselves in a male-dominated field, or ensuring every detail is in place for their kids (or all of the above), they have the whole killing-it-at-life thing down pat. That’s why it’s no surprise that so many women are preparing for the 2022 Beijing Olympic Games, gearing up to compete in events ranging from hockey to snowboarding to curling. Many of those women have even taken it one step further: some are parents and some are training while trying to conceive. But can athletes compete in the Olympics while pregnant? If past Olympians are any indication, then the answer is a resounding yes.

If you’ve been pregnant yourself, then you know that just getting up everyday and simply existing is a difficult task. Getting up and training for the Olympics while also growing a child inside of you? That seems nearly impossible, but there are some superstars out there who have proven it isn’t.

Who Has Competed In The Olympic Games While Pregnant?

Beyond the Olympics, elite athletes are also choosing to stick with their sport while pregnant. In April 2018, Olympian Alysia Montaño announced she was expecting her second child in November, but that didn't keep her from racing in June's USA Outdoor Track and Field Championships in Sacramento, California. Montaño, who finished fifth in the 800 meters at the 2012 Olympics, also competed at the 2014 U.S. Championships while eight months pregnant with her daughter Linnea, according to Sports Illustrated.

In June 2021, heptathlete Lindsay Flach competed at the track and field Olympic trials in Eugene, Oregon while 18 weeks pregnant. Flach told Yahoo Sports, “It was hard mentally because I knew I wasn’t going to be able to compete at the level I was capable of 18 weeks ago, but I just wanted to prove what women are capable of.”

And in October 2021, British cyclist Elinor Barker revealed that she had been pregnant while competing at the 2020 Tokyo Olympics, where she won a silver medal.

Is It Safe For Pregnant Women To Compete In The Olympics?

Dr. Raul Artal, who co-authored a report commissioned by the International Olympic Committee in 2015 to study elite athletes and pregnancy, told TeamUSA.org that carrying a child “should not be a state of confinement, but rather an opportunity for women to continue an active lifestyle or to adopt an active lifestyle if they were not active before.”

For elite athletes, Artal said he has “no concerns about continued training and competing.” He recommended that female athletes keep their heart rates around 145 to 160 beats per minute (BPM) for ages 20 to 29, and 140 to 156 BPM for ages 30 to 39. Of course, the rule of thumb to check with your doctor applies here, too — athlete or not.

Some things to look out for while exercising during pregnancy include vaginal bleeding, dizziness or lightheadedness, unusual shortness of breath, racing heartbeat or chest pain, and/or unusual pain, according to the ACOG.

Overall, however, experts agree that exercise during pregnancy is not only OK, but can be extremely beneficial for you and your baby. I mean, after all, while you and I may not be Olympians, we are certainly happy to kick irksome pregnancy symptoms to the curb, right?

More Like This
18 Pregnancy Announcement Ideas Break The Good News To Your Family
Are Movie Theaters Too Loud For Pregnant People? OB-GYNs Explain
The Ultimate Baby Registry Checklist
24 Beautiful Baby Names With The Same Vibe As Mila

This article was originally published on Feb. 7, 2018