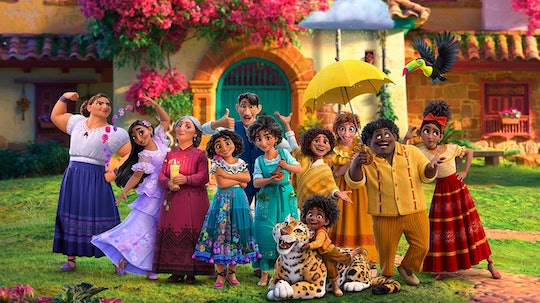 A Bunch Of Encanto Attractions Are Coming To Disneyland This Month

The Madrigal magic is taking over Disneyland!

This spring, the Madrigal magic is alive and well at Disneyland! In celebration of the Academy Award-winning movie, Disneyland is spotlighting Encanto throughout its theme park in a series of light displays, floats, and character appearances. And, of course, you can expect to hear “We Don’t Talk About Bruno.”

Starting for a limited time on April 11, the “It’s A Small World” display will light up each night and pay tribute to the movie’s hit song, “We Don’t Talk About Bruno.” The projection and lighting effects are inspired by the song’s lyrics, including the tiles which move like the magical ones in the Madrigal family’s Casita, Shawn Slater, senior communications manager at Disney Live Entertainment, shared in a recent Disney Parks blog post.

Also during the day, guests can catch a glimpse of Mirabel herself at Frontierland’s Zocalo Park. Kids and adults can get a photo op with the young Colombian protagonist. Behind her is a painting of the Family Madrigal as seen in the movie.

Finally, to wrap up the magical evening, Encanto will make its appearance in the “Main Street Electrical Parade,” which returned as part of the park’s 50th anniversary. The float will be the “new grand finale float that brings together stylized scenes from more than a dozen Disney and Pixar stories, including Encanto,” Slater shared on the blog post. “Sparkling lights depict the Casita, magical butterflies, and Miracle Candle from the film, with Mirabel and her cousin Antonio, represented as animated dolls atop their section of the float.” The float will make its premiere during the Main Street parade on April 22.

The magic of Encanto, Disney’s 60th animated film, is also being celebrated at Walt Disney World. Back in March, EPCOT unveiled an Encanto-inspired garden as part of its International Flower & Garden Festival. The garden features tropical depictions of Mirabel, Julieta, Isabela, and Luisa.

Encanto was previously featured at Disneyland Adventure Park for “Disney ¡Viva Navidad!” festivities at Disney’s Festival of Holidays this past fall. Back in December, actress Stephanie Beatriz, who voices the character of Mirabel, visited Adventure Park to experience the Encanto display for the first time. “Seeing Encanto come to life at Disneyland is amazing just in time for the holidays,” Beatriz told Disney Parks.

So not only can you watch Encanto over and over again on Disney+, but now you can talk about Bruno all you want with fellow movie lovers at Disneyland this spring.

More Like This
12 Last-Minute Vacation Spots For Memorial Day
You Can Walk Through Barbie's Dreamhouse & Fulfill Your Childhood Dreams This Summer
A Father Of The Bride Remake Is Coming To HBO Max This Summer
Are You There God? It’s Me, Margaret Is Finally Heading To The Big Screen