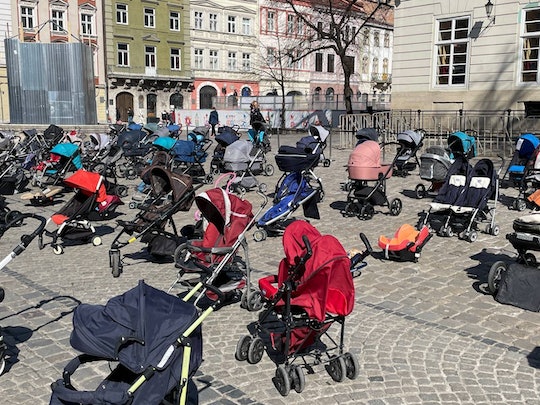 “This is a terrible price of war that Ukraine is paying today.”

In the weeks since Russian forces invaded Ukraine, over 100 children have been killed in the conflict. It’s a staggering number to contemplate, a loss of life that is difficult to imagine or comprehend. Until 109 empty strollers — double strollers, jogging strollers, strollers with cup holders and storage for diaper bags — were lined up in the town square of Lviv, Ukraine.

On Friday, Lviv Mayor Andriy Sadovyi shared the stark image on Facebook. “From the beginning of the full-scale invasion, Russian troops mercilessly killed 109 Ukrainian children. Empty baby strollers on the Market Square today are symbols of the lives of those angels who, instead of decisive actions of the world, protect the sky over Ukraine,” Sadovyi captioned the photo. “This is a terrible price of war that Ukraine is paying today. We call on all adults around the world to stand as one shield to protect Ukrainian children and give them future.”

Sadoyvi asked others to share the photo widely to remind people of the children whose lives have been so needlessly lost in the hopes of inspiring other countries to “close the sky over Ukraine.” To stop the relentless bombing from Russian forces like the recent bombing of a theater in Mariupol that had the word “children” written to designate it as a shelter, as NPR reported.

Empty strollers were left in Ukrainian city as a reminder of lost children.

On Wednesday, Ukrainian President Voldymyr Zelensky spoke to Congress about the children whose lives have been lost in Ukraine. “I'm almost 45 years old. Today my age, stopped when the heart of more than 100 children stopped beating,” the father of two said in a video message. “I see no sense in life, that cannot stop the deaths.”

Last week, First Lady Olena Zelenska went even further in an open letter pleading for help. “Perhaps the most terrifying and devastating of this invasion are the child casualties,” she wrote. “Eight-year-old Alice who died on the streets of Okhtyrka while her grandfather tried to protect her. Or Polina from Kyiv, who died in the shelling with her parents. 14-year-old Arseniy was hit in the head by wreckage, and could not be saved because an ambulance could not get to him on time because of intense fires. When Russia says that it is 'not waging war against civilians,' I call out the names of these murdered children first.”

Now, along with their words, there is a gut-wrenching display of empty strollers to remind the world of the horrific toll this war is taking on children.