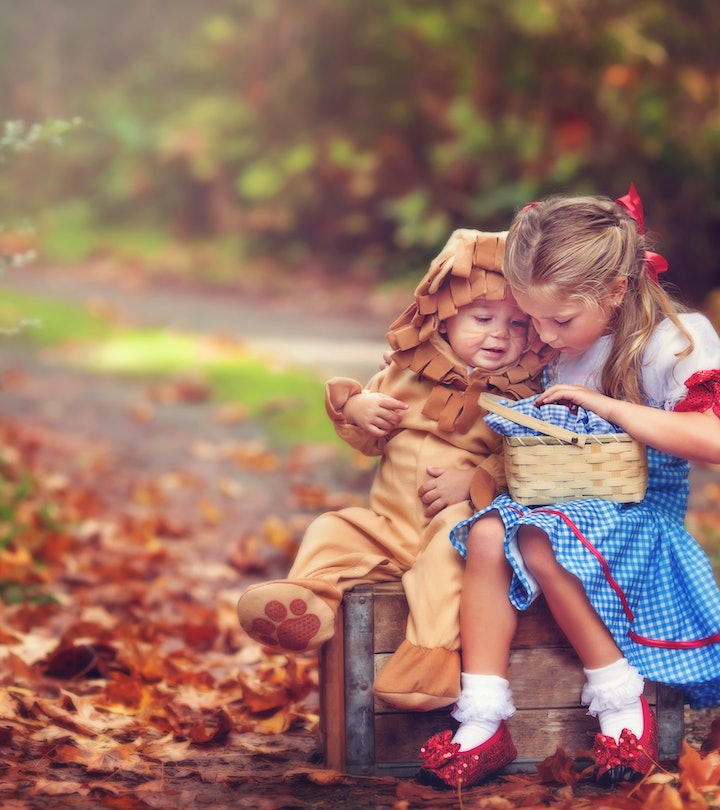 For the lucky ones whose kids aren’t “too cool” for group costumes.

There are so many ways to approach a Star Wars-themed family Halloween costume. You can choose to focus on the new movies, or even do a Mandalorian-themed set of costumes — Disney has many to choose from, including a Grogu outfit for the family dog. However, we love the idea of a throw back and nothing compares to the OG. Keep it classic, with (literal) baby Yoda, papa Darth, Leia and young Obi Wan. These classic Star Wars costumes are so easy to recognize, and never out of style. Take note, though, that the baby-sized Yoda outfit is available for both babies and toddlers, so pricing will vary a bit, depending on which size you need.

Every year around this time, our family re-watches all of Harry Potter. There’s something that’s just so perfectly cozy-spooky about the stories — probably all the witches, ghosts and wizards, I suppose — that sets the mood for fall and makes it a little easier to let go of summer. If you want to celebrate your family’s love for these beloved books and movies, nothing could be more perfect than a Harry Potter family Halloween costume. You’ll be overwhelmed by the many choices for grown-up Harry Potter costumes, though — should you have Dumbledore and McGonagall? Bellatrix and Voldemort? Plus, if you have more than one big kid, you may have a tricky time deciding who gets to be Harry. And, if that really does become an issue, who says there can’t be two Harrys? If you have an amenable baby in your family, though, let the big kid be Harry and have the baby dress up as Hedwig, Harry’s trusty owl.

It doesn’t get much more classic than the Wizard of Oz, and it’s full of many fun characters to choose from like Dorothy, the Scarecrow, Cowardly Lion, the Tin Man, the Wicked Witch of the West, Glenda the Good Witch, and even The Great and Powerful Oz himself. What’s really great about a lot of these family Halloween costumes is that, if you don’t want to spend a lot of money, you can probably find a lot of the essentials in your closet already. Just make sure you have some face paint for the different characters as well as their iconic accessories like a broom for the witch, a pretend ax for the Tin Man, and a pair of sparkly red shoes for Dorothy.

The Nightmare Before Christmas family costumes

The Nightmare Before Christmas is among the best Halloween movies (you cannot convince me that it’s a Christmas movie) so it’s only appropriate for your family to pay tribute to it with a group costume, right? Character options include Jack, Sally, the Mayor, Oogie Boogie, Dr. Finkelstein, Lock, Shock, Barrell, Zero, and even Santa Claus (or Sandy Claws, as they call him in Halloweentown). The best thing about this family Halloween costume idea is that, since it’s such a popular movie, the costumes aren’t hard to find in any size.

For families who enjoy solving mysteries together, consider dressing up as all of the fun characters from Scooby-Doo. The main gang includes Fred, Daphne, Shaggy, Velma, and Scooby, but if you need more costumes you can always add in Scrappy, The Mystery Machine, or a spooky monster disguise so one member of the family can be the villain of the week. These costumes are especially great for families who like DIY costumes, because, aside from Scooby, they’re mostly made up of easy pieces of clothing you either already have at home or can easily find. Who knows, maybe you’ll even stumble across a puzzle on Halloween night that can only be solved by Mystery Inc.

All you have to do is watch The Greatest Showman and you’ll see why the circus inspires so many great family Halloween costume ideas. Between the vintage characters and the many animals, there are a lot of options to choose from. There is, of course, the ring leader and their lion, but there are also trapeze artists, sideshow characters, and clowns, among so many other performers. Some classic circus animals include elephants, tigers, bears, and monkeys. So, whether you need a family Halloween costume idea that’s for four people or 14, the circus costume idea has your back.

Everyone loves the Marvel ‘cinematic universe’, right? Even the haters must secretly sort of love at least one of these epic movies. And you know they’re easily recognizable, at the very least. So, why not assemble your own Avengers family for a super-powered group Halloween costume? This is another theme that has an overwhelming number of fantastic characters to choose from, especially since the Marvel universe is becoming a “multi-verse” and there seem to be new heroes and villains constantly. Maybe everyone picks their own version of Loki from the Disney+ series, or everyone can pick their own hero, or there’s always the beloved Agatha from WandaVision. The list of options is pretty much endless at this point.

The nice thing about Winnie The Pooh family costumes is that there are plenty of characters in the hundred-acre woods that are simply animals, like Rabbit, Owl, Kanga, and Roo, so you don’t have to try to find licensed costumes for every single person in the family if you don’t want to spend a lot. There’s also the option to get a little creative — maybe one member of the family dresses up as Pooh and someone else is his Hunny Pot, or maybe Rabbit and a scarecrow from his garden. It’s one of those family Halloween costume ideas that can go in so many different directions and is so beloved by all that no one will wonder what exactly you all are trying to be.

Another show that seems to live on and on is The Flintstones, which is great because there are plenty of character costumes for the whole family. Plus, many of these costumes is that they are pretty easy to DIY, especially since they all have jagged, torn edges by design, so even if you mess up a few cuts or stitches, it’ll just add to the costume’s authenticity.

Take the family on an African safari this Halloween. Or, rather, turn them into an African safari. To make this family Halloween costume idea work, you’ll need at least one person to dress up as a safari guide in all of their khaki glory. Then, the rest of the family members can dress up as their favorite exotic animals. Some animals that you can expect to find on a safari include giraffes, lions, zebras, hippos, elephants, cheetahs, hyenas, rhinos, and antelopes. If your kids happen to have a little Power Wheels Jeep, then having them ride around in it while trick or treating is highly advised (or you can always convert the family wagon into one, too).

The fact that you can walk around singing Monster Mash all night long is reason enough to go with this family Halloween costume idea, but it also happens to be a really fun option. Basically, anything goes with this one — from the traditional Frankenstein’s monster to Dracula to a mummy. There’s also some freedom to get a little creative here, too. Add the Loch Ness Monster, Big Foot, or other cryptids that may or may not be real — and that many kids are totally obsessed with. Whatever monsters you and your family decide to dress up as just make sure you’re all a little different to really play up the “mash” aspect of the group costume.

Out of all of the family Halloween costume ideas, this is among the most unique and there are so many different ways you can go with it. The whole theme is space and aliens, so costumes can include astronauts, a rocket ship, stars, planets, moons, constellations, UFOs, and of course aliens. This theme also gives you a lot of opportunities to incorporate some glow sticks or other glow-in-the-dark elements into your costumes while trick-or-treating, which is always fun for kids (and adults, if we’re being honest). The best part, if you have a toddler who is really into all things Toy Story, then they can dress up as Buzz Lightyear and fit right into the family’s theme.

Now that you have some good ideas, it’s time to start getting your family’s costumes ready, because Halloween will be here before you know it.

Answers to the questions that keep you up and night — and stories you want to share with the group chat.

This article was originally published on Sep. 28, 2021