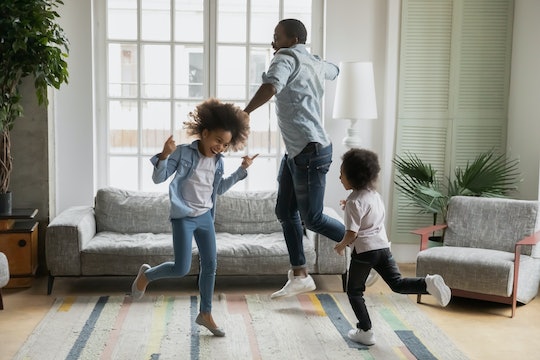 55 Songs About Dads For Father's Day That Say It All

This one's for Dad.

There are songs that make you instantly think of someone special and that’s especially true for tunes about dads. Whether a classic country song evokes memories of riding in the bucket seat of Dad’s pickup or Billy Joel’s “Lullaby” makes you think of when your father used to tuck you in each night, music can shape memories of dads. So play him one of these great songs about fathers for Father’s Day.

Whether you’re searching for the perfect wedding slow dance number for you and Dad or just want to play a track to tell dad how much he means to you, there’s a lyric and a melody in each of these songs that will tug at his heart strings.

Naturally, this list is heavy on classic pop stars your dad likely already loves, but there are also some more recent musicians mixed in too to give even the newest dads a great jingle they can replay (again and again) each time they think about their babies. You may have a tough guy for a father, but try playing one of these hits for him and see if he doesn’t start complaining about having a little dust in his eye.

The daddy/daughter bond is something unique. For some women their dad is their hero, for other’s he’s a steadying force for good. Either way all the things dad has done for you may be hard to sum up. So say it with a song instead.

Want to get a big old lump in your throat; tell a Dad his son picked one of these songs about him. Woo boy, there won’t be a dry eye in the house.

A pop song for pop is a great way to celebrate Father’s Day. Crank it up and turn the kitchen into a dance floor with one of these great tunes.

Country music is a veritable trove of great songs about fatherhood. Sappy? Sure. Sweeter than a peach pie? Always. Worth a replay? You bet.

So grab your tad and say “Alexa, play... ” then give your dear old dad a big hug.