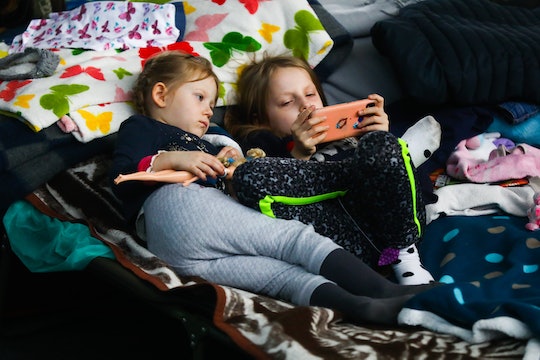 So they can find comfort in watching familiar TV shows.

The last month has been truly devastating for Ukrainian children. Millions have been taken from their warm homes, their little beds, their toys and their routines to flee the only country they’ve ever known as Russian forces launched a full-scale invasion. As the rest of the world scrambles to find homes for these children, many are left without simple comforts, like TV shows. To ease some of that distress, several major networks in the UK have teamed up to create a free YouTube channel for refugee Ukrainian children so they can easily stream popular kids’ series.

The BBC, ITV, Sky News, Channel 4, Channel 5, and BFI have joined forces to create a unique, free “pop up” YouTube channel that will be made accessible to 3 million displaced Ukrainians throughout Europe, iNews reported. The channel will air original British children’s series dubbed into Ukrainian as well as Ukrainian television series.

“These children will find a warm home, will have food in their belly and thanks to the generosity of so many fellow citizens will be looked after. What they won’t have is very much in Ukrainian that they can watch,” McVay told iNews.

The YouTube channel has yet to be given a name, but McVay has already reached out to other members of Pact to share programs that would be educational, dramatic, or funny, basically “anything that would play well with a broad children’s audience.” McVay said in an email, per iNews, that Ukrainian children should have access to “programmes that can comfort, nurture and entertain young minds in their own language.”

Ukrainian refugees who have fled their country have been welcomed into neighboring countries Slovakia, Moldova, Hungary, and Romania, according to the BBC, with Poland taking the majority of refugees at just under 2 million people.

For those millions of children trying to learn their way in their new world, what a comfort it will be to just sit and watch a bit of familiar television. It’s a simple thing, but it matters.