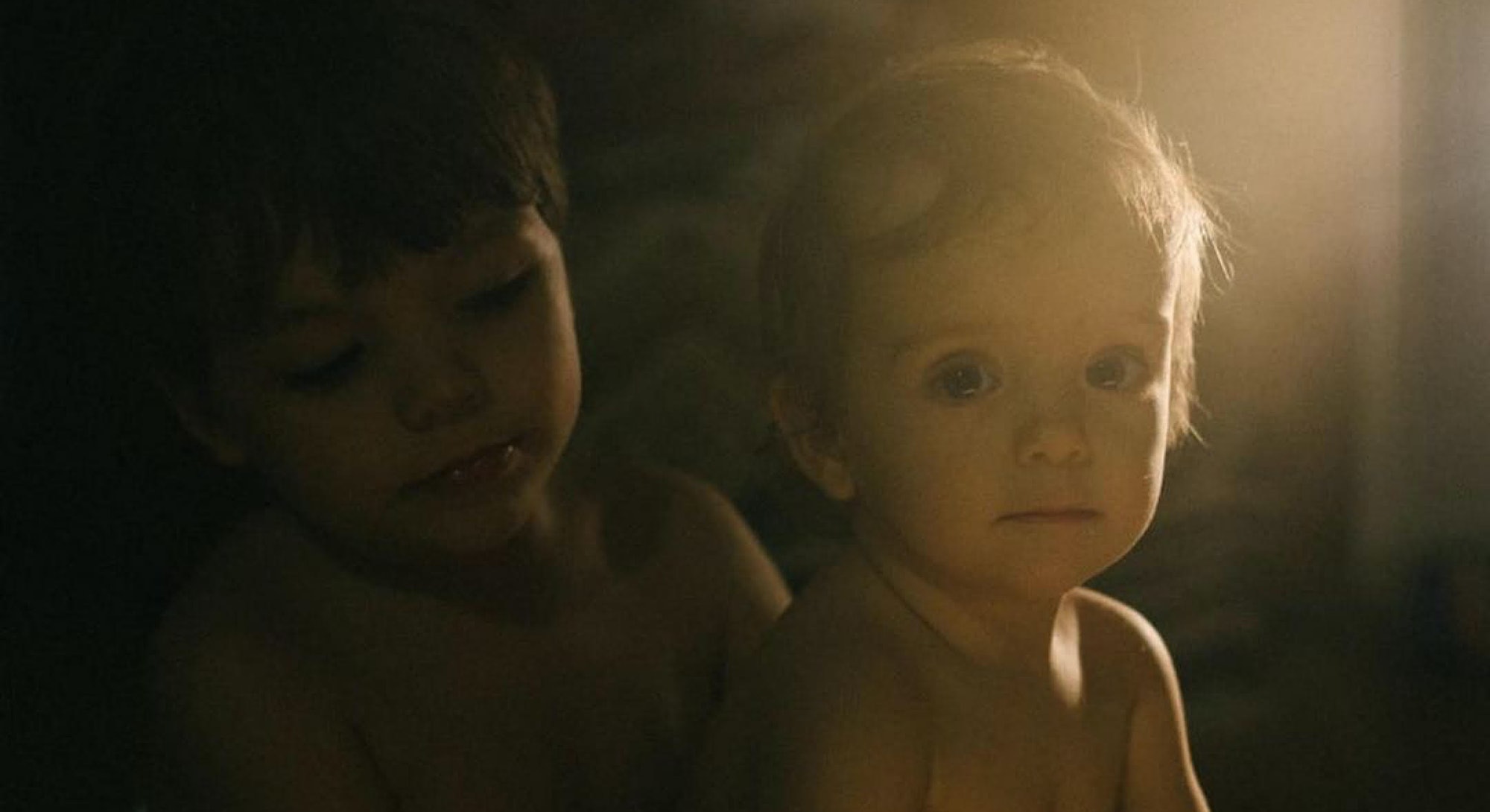 “This is Timothy, my son, and he does not know that there is a war.”

For the last week and a half, since Russia invaded Ukraine, Karni Arieli, a filmmaker/photographer and mother of two in the UK, has been receiving messages like this. Arieli runs the popular Instagram account Eye Mama Project, where she curates powerful, exquisite photographs taken and submitted by fellow mothers and photographers from all over the world during the pandemic.

The account, which now has just shy of 9,000 followers, has brought connection and visibility to what Arieli calls the “mama gaze.” And now, it’s bringing the world images of the people most affected by this war, the mothers and families in the countries threatened, and ruled, by violence.

Arieli started the Eye Mama Project after the first pandemic lockdown in Bristol, England, where she lives with her husband and their two sons, ages 5 and 15. She says she was “looking for a reflection of myself, or something to empathize with and connect with, and not really finding it out there.” With the support of Alessia Glaviano, the brand visual director of Vogue Italia and head of Global Photo Vogue, Arieli launched the @EyeMamaProject Instagram account, and it quickly bloomed into a phenomenon. Photographers that identify as mothers are invited to submit images by hashtagging #eyemamaproject in their own Instagram posts. Arieli says the project to date has received more than 22,000 submissions, and currently comprises over 2,000 images representing mothers and their families in 30 countries.

“I curated this sort of vision of motherhood in lockdown because I realized all these photographers were at home, and suddenly they turned their lens inward to their own families … and I was like, ‘Wow. This is such a powerful portfolio of motherhood never before seen,’” Arieli told me when we first spoke about her project in January. At the time, she was in what felt like a losing battle against Instagram’s censors — the account’s images of mothers, children, and families in the pandemic had been removed for “not following community guidelines.” This followed several warnings from the social media site, which removed or flagged various images of mothers and babies, none of which, she says, seemed in any way problematic. The account was reinstated a couple of days later, with no explanation.

Arieli says she considers the body of work to be “a nearly historical essay” of motherhood, because, she points out, in times of political and social upheaval, whether pandemics or wars, men usually tell the stories. “It’s never women telling the story. And it’s definitely never mothers telling the stories because we’re always in fight-or-flight mode. Right? We’re too busy. We’re too knackered. We’re too… There’s no place for us to tell it. Nobody’s interested. Nobody’s asking us. But we’re empowering ourselves now.”

This window into the life of motherhood, of course, didn’t just go missing during the pandemic. “The pandemic highlighted it. But it’s missing all the time,” she says. “Looking into the home is something that people don't often do, they don't often empathize with care; it’s not often looked up to or appreciated. Care isn’t a commodity, empathy isn’t a commodity, and it’s often underestimated.”

The community has also provided a lifeline in a very isolating time. “Sometimes we’ve just been there for each other in the middle of the night when moms are awake, or breastfeeding, or struggling with motherhood as well as with their art and photography — because all these mothers are artists as well as mothers.”

“This platform has given hope and connection to many in tough times,” Arieli wrote to me this week. “Mama gaze matters. Our story matters.”

This is one mum telling another mum, both artists, ‘I’ve run away with my kids, with one suitcase and I don't have a home and I’m with my parents. I don’t know what the future holds. I’m praying for peace. I’m scared and worried for my kids.’

Then, just as it seemed we might be leaving the pandemic behind, or at least learning to live with it: war. “I suddenly realized that Ukrainian and Russian women were following me and posting messages of peace,” Arieli told me via Zoom from her home studio on, ironically, International Women’s Day. She realized the platform could do more than provide connection; it could connect its audience and participants to all to the mothers and children who need our attention the most right now.

“My son is almost 4 years old, and he’s incredibly sensitive to what’s happening and to what I’m feeling. Several times a day he asks, ‘Mom, will you never lose me? Mom, you won't give me to anyone?’ I hug him, assuring him, ‘Son, I love you, I will always be there, you are safe.’” —Viktoriia, UkraineViktoriia Dudar, The Eye Mama Project
1/2

“Hearing first hand from a mum sending me a direct message with a story, it immediately connects me,” Arieli says. “I feel this great empathy ... I feel a great responsibility because it’s different from just seeing it in the newspaper. This is one mum telling another mum, both artists, ‘I’ve run away with my kids, with one suitcase and I don't have a home and I’m with my parents. I don’t know what the future holds. I’m praying for peace. I’m scared and worried for my kids.’ These are women, also post-pandemic, having to deal with all this. Imagine.”

With each image she shares, Arieli includes any words the photographer has submitted, and a message and prayer for peace. She’s also directing people toward Choose Love, a UK-based humanitarian organization raising funds for Ukrainian refugee support.

“Sometimes it’s the only thing you have, to tell your story. And that story creates empathy and that empathy can get visibility and that visibility amplifies that message throughout. So if you’re saying, ‘We’re looking for peace and we’re looking for connection and humanity,’ this is my small part in trying to support that,’” says Arieli, who grew up in Israel. “I know countries that have sirens; I ran to bomb shelters and things like that. And I don't want it for my kids, I don't want it for anyone’s kids. I don't think any mother wants it for any kids.”

The choice to highlight not only Ukrainian mothers’ work, but photographs from Russia, Belarus, and Poland, was deliberate. Everyone who shares their intimate images on the platform is desperately hoping for the same thing: peace. “I was a bit worried about posting the Russian mamas, whether there would be some toxic comments or something, but so far there have been none,” she says. “I’ve put a message of peace — that’s what they’re conveying, and I think within this platform, it’s pretty obvious that all these women want the same thing.”

Motherhood undoubtedly makes us achingly vulnerable, and that vulnerability can keep us silent, focused on the work of staying alive, of keeping our children alive. But it’s exactly that vulnerability, says Arieli, that gives us our empathy, our power. “We’re much more connected to humanity, I think, because we can imagine ourselves with kids dragging a suitcase and running away. It’s beyond comprehension, but also close enough to be able to connect, and to want to do something about it, I guess.”

A pandemic, a war — these things are impossible to imagine until they’re here, and then what can we actually do, any one person?

“It’s unfathomable and it seems like it’s unstoppable at this point, really,” says Arieli. “But that’s why I feel like, ‘Okay, it feels out of our control. But if we all pick up whatever tool we have and do a small thing, maybe that accumulates to something more than nothing, and maybe that can help.” She pauses, then brings to mind the photograph seen around the world on social media last weekend: a row of empty strollers at a train station.

“Did you see the buggies that the mums are putting at the Polish station? That’s an act of kindness, that is an act of empathy, and that is power. Being able to see someone and be in their skin, that is the power.”

For more eyes into the experiences of women, mothers, and children in Ukraine, Arieli also recommends following these Instagram accounts: Olena Zelenska, the First Lady of Ukraine; Olia Hercules, an activist, chef, and founder of #CookForUkraine project; and Lynsey Addario, a Pulitzer prize-winning photojournalist in Ukriane.