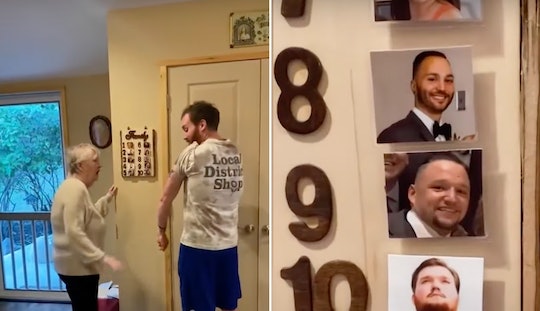 Just don’t get any tattoos! Or else...

We’ve all heard of those grandmothers who bake pies to spoil their grandchildren and just shower them with unconditional love. That’s one path to take if you want to blend in and be part of the pack, even if it sounds exhausting. But it’s not the path this grandmother who’s gone viral on TikTok has chosen. Not only has she decided her love definitely has conditions, she’s making sure her grandchildren know by putting their faces on a ranking board on the wall. And none of those places are secured, it all depends on how she’s feeling that day.

Comedian Dan La Morte took to social media recently to share his grandmother’s ranking board for her 10 grandchildren with his followers. It seems she has a wooden board on her wall with the numbers one through 10 and magnets featuring her grandchildren’s faces. He was pretty excited, apparently, because for he was ranked number four, “the highest I’ve ever been.”

Not for long, unfortunately. “I did just get two new tattoos though, so I’m a bit nervous about what that’s going to do for my ranking,” La Monte explained.

Now, he could have kept them covered and thus protected his coveted number four spot on the ranking system, but he decided to come clean to his grandmother. “What do you think of my new tattoos, grandma?” he asked in the video as she gasped. “This is what I think of your new tattoos,” she answered, moving him from number four to number 10 as dramatic music played in the background.

Social media users were fascinated by this grandmother who has decidedly chosen to go off script with her grandchildren by making them fight for her affection. “We need more info on the ranking! What’s her thought process? How did everyone end up where they are on the board? So many questions,” wrote one user, while another asked, “Will there be a final fight to the death at the end of the year?”

La Morte and his grandmother, who calls herself “Nanny,” sat down for a TV interview with WGN shortly after the TikTok video went viral, and she further explained her system. It seems the grandchildren all move their own faces to number one when they visit but don’t worry, she puts them right back where she had them in the first place.

When asked who has spent the longest stretch at number 10, they both immediately called out “Arianna.” Why is she in bottom place? “She doesn’t call Nanny and Grandpa, and she doesn’t come visit too often.” Things like getting married or having a baby move grandkids up to number one, although La Morte noted that “number three is as high as you can get because number one and two are pretty solidified.” Because number one lives across the street and plays Wordle with her, while number two is a veterinarian. So there you have it.

The moral of this story? Just because you’re a grandma doesn’t mean you have to give up your sass. Make those grandkids work for your love by publicly announcing your favorites. And I especially love the idea that the favorite is not guaranteed top spot forever. All it takes to lose your ranking is a tattoo and boom, your magnet is moved easy as anything.

More Like This
Viral Reddit Post Asks If A Toddler Can Watch Cartoons Without Headphones On A Plane
"Corn Kid" Handed Out Over 40,000 Cans Of Corn At A Food Bank Ahead Of Thanksgiving
Over 10,000 Sippy Cups & Bottles For Toddlers Recalled Due To Lead Poisoning Hazard
Hero Who Tackled Colorado Gunman Was At Nightclub With Family To See Drag Show