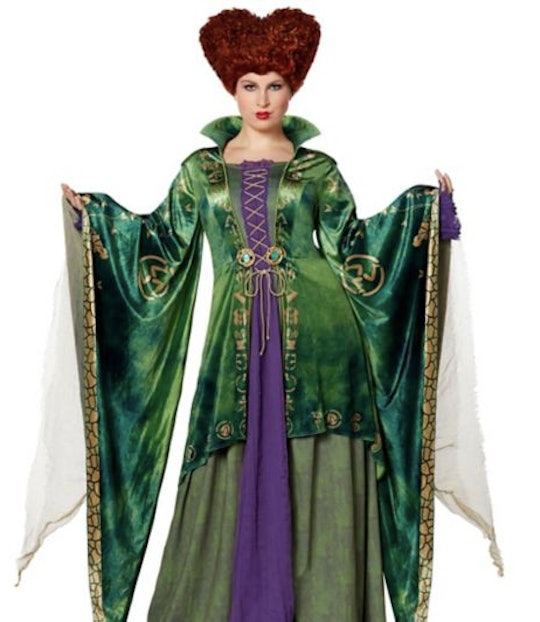 These Hocus Pocus Costumes Are Fit For The Whole Family, Even The Dog

They’ll put a spell on you.

Like many a cult classic, Disney’s Hocus Pocus was a flop when it was released in 1993. But fans persist and Hocus Pocus costumes continue to sell. Even though the movie about three zany witches — Winifred (Bette Midler), Sarah (Sarah Jessica Parker), and Mary (Kathy Najimy) — only took in $39.5 million at the box office, according to The Lily, and earned just one star from famed movie critic Roger Ebert, it’s gained traction through the years. Maybe it’s due to the millennial kids who, thanks to VHS tapes, watched it over and over. Or maybe in hindsight, we just love the fact that the Sex in the City mega star was a total nerd in the fantastical spooky tale. Whatever the case, Hocus Pocus love persists and that’s why these costumes are going like hotcakes.

Naturally, the main characters make up the bulk of the Hocus Pocus costumes selection. However, you will also find a few variations on Billy Bucherson — Winifred’s ex-boyfriend, a zombie, natch. There are also Dani Dennison costumes, the precocious 8-year-old who fights the witchy sisters.

So whether you’re new to the Disney film or an old fam, the appeal seems to be the same: if you know, you know. And in that case, snag one of these Hocus Pocus costumes to share your appreciation with the whole neighborhood.