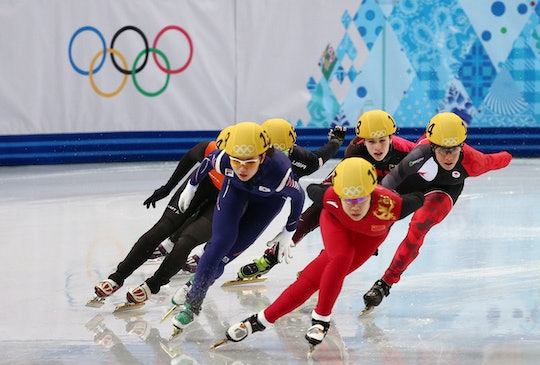 Here’s How Fast Those Olympic Speed Skaters Are Really Going

They don’t call it speed skating for nothing.

The Winter Olympics are always full of thrilling icy athletic events. If you have a need for speed and get a kick out of races, tuning into speed skating during the 2022 Winter Olympics, hosted in Beijing, China, is right up your alley. Olympic speed skaters move across the TV screen so quickly that some of the shorter races seem to be over in mere seconds — they don't call it speed skating for nothing. While you sit in to watch the exciting, nail-bitingly intense sport play out on screen, you may find yourself wondering: How fast do Olympic speed skaters go, exactly?

First things first, there are two separate speed skating sports in the Olympics: short track and long track, each with several of their own events. Short track speed skating involves racing on ovals of just over 111 meters in length, whereas long track takes place on 400 meter ovals. The smaller oval in short track means that turns make up most of the race, so athletes focus on keeping their bodies extremely low to fly around the tight corners, usually putting their hand on the ice to utilize their momentum correctly.

In long track (often just referred to as “speed skating”), the bigger oval lends to more speed in the straightaways and wider turns, so the sport’s athletes are typically very tall with extremely long legs to power their speed and stride. Plus, whereas in short track, competitors race against one another in a big pack, long track speed skating simply involves racing against the clock.

For more about how fast Olympic speed skaters go, as well as what to look out for in the sports at the Beijing 2022 Winter Olympics, which kick off on February 4, keep reading.

Short track speed skaters can reach an average speed of 31 mph, according to the International Olympic Committee (IOC), which means a single lap around the short track oval can be completed in under nine seconds. Given that top speed, viewers are often confused as to why the race starts off so slow. The truth is, the short track athletes have to build up to that top speed, gaining momentum with each corner they navigate. And the beginning of the race is often a mind game about how they can best position themselves against the others.

Of course, short track is about more than just speed. The athletes have to continually keep in mind their positioning within the pack and their space relative to other competitors. A single misstep or minor elbow bump can send them flying off the track. Given that the sport is so chaotic, with the skaters constantly jostling for position, over the course of the last two Winter Olympics (Sochi 2014 and PyeongChang 2018), no skater has been able to successfully defend their title, according to the IOC — with the exception of the Republic of Korea's 3000m women's relay team. In fact, the Republic of Korea is the most successful nation in short track speed skating in Olympic history.

Long track speed skaters can go as fast as 35 mph, depending on the length of the race, according to the IOC. That's higher than the speed limit for cars in some neighborhoods. While the South Koreans have the winningest history in short track, the Dutch Olympians have a legacy in dominating speed skating.

Short track was not invented until much later in the early 1900s, in the United States and Canada, as developed by skaters who did not have access to 400-meter tracks. They began practicing on smaller ice rinks out of necessity, thus giving birth to short track speed skating. It became an official Olympic sport in 1992 at the games in Albertville, France.

Given the high-speed nature of these sports, they don’t come without danger. Several speed skaters compete at the same time, all trying to get a good position on the track, meaning there's a high possibility of collision. They're all wearing super sharp blades that are about 46 centimeters (1.5 feet) in length and just 1 millimeter thick, according to the IOC. Because the sport is so dangerous, most speed skaters take precautions to protect their bodies, which includes wearing helmets, goggles, knee guards, shin guards, neck guards, a cut-resistant suit, and cut-resistant gloves.

At the 2022 Winter Olympics in Beijing, all speed skating events will take place at the National Speed Skating Oval, also known as the Ice Ribbon. For short track, skaters will have the opportunity to compete in nine events organized by distance, including the new mixed 2,000-meter relay event, which includes national teams comprised of both men and women. All athletes can compete in races of 500 meters, 1,000 meters, and 1,500 meters. However, for short track relays, men race in a 5,000-meter relay and women compete in a 3,000-meter relay.

Athletes to watch out in women’s short track include Choi Min-Jeong of the Republic of Korea (gold medalist in the 1500m in PyeongChang and 500m Olympic record holder), Arianna Fontana of Italy (reigning Olympic champion in the 500m and the greatest female short track skater in Olympic history), and Suzanne Schulting of the Netherlands (gold medalist in 1000m in PyeongChang and winner of all events at the 2021 World Championships). As for the men’s short track, China’s Wu Dajing (500m champion at PyeongChang and world record holder) is a favorite, but the Hungarian brothers Shaolin Sandor and Shaoang Liu (members of Hungary's gold medal 5000m relay team in PyeongChang) also pose a formidable threat.

With what is sure to be an exciting year in both short track and long track at the Beijing Winter Olympics, make sure to tune in on February 5 for the beginning of the speed skating events.

This article was originally published on Feb. 12, 2018