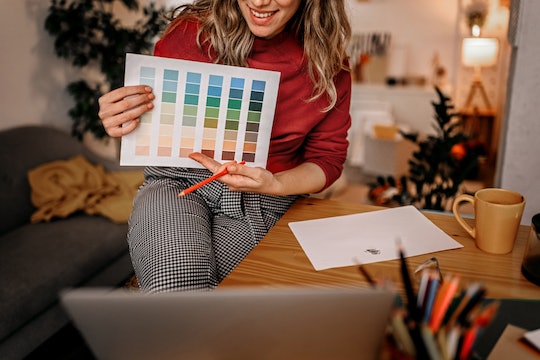 Astrologers Say This Is The Lucky Color For 2022

It’s all about the neutrals.

If you’re trying to start the new year off on the right foot, you’re probably considering your New Year’s resolutions and maybe even committing to a dry January— but you’ll also want to think about your color choices. Yep, as it turns out in astrology, each year has a lucky hue (because we’ll take whatever luck we can get in these times that are starting to seem pretty precedented). As for the lucky color of 2022? Well, spoiler alert, put away the neons.

"Each year we look at what sign Jupiter is transiting in to determine the lucky color (in Western Astrology)," as Kyla Derkach, founder of Hatha Astro, previously told Romper. For the upcoming year, you’re going to want to reach for more subtle, calming colors. "A more conservative palette is called for in 2022. Think subdued greens, tans, and grays. Low-key and earthy is the vibe, " Kristin West, celebrity astrologer and tarot card reader, tells Romper via email.

So if you’re into soothing neutrals, then 2022 just may be your year. “Saturn is in Capricorn and then Aquarius this year. Saturn rules both signs. We want to move with Saturn as much as possible to prevent delays, obstacles, and difficulties in timing. Uranus is also still in earthy Taurus. Sage green and a splash of pastel pink from time to time will help to align with Uranus in Taurus.”

If neutrals seem blah to you, you’ll be happy to hear that come April, colors are back (well, kind of). “After April, you can add some funkier colors as a nod to Saturn in Aquarius as accents, such as silver, chrome and periwinkle, but keep it light,” West says. As for what to avoid? Black, deep purples and burgundy according to West.

So how can you incorporate the lucky colors of 2022 into your life? It could be in big or small ways. “Connecting to crystals or rocks can... be advantageous. Focus on these colors during aura meditations," Derkach told Romper previously. You could try wearing dusty, neutral colors this year, or even incorporating them into your makeup looks. Mint green and bright pastels are predicted to be 2022 makeup trends, which aligns with the lucky colors of 2022. Here’s hoping that skipping the aubergine in favor of a more muted color palette will lead to a brighter (well, in a neutral way) 2022.