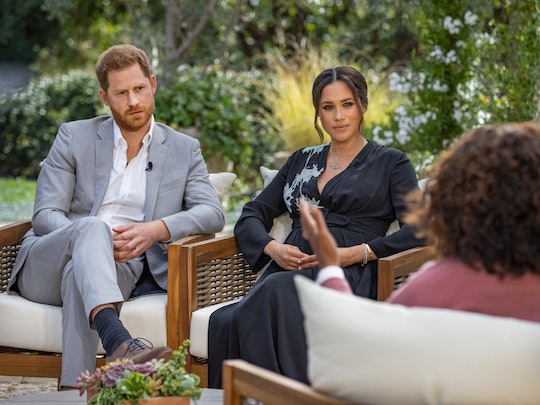 Meghan Markle's Public Vulnerability Is A Gift To Other Moms

I can tell you that you will read a thousand articles telling moms to ask for help and I can tell you as a mom that it is not something we do easily.

In the aftermath of a tense, insightful, difficult two hours of watching the Duke and Duchess of Sussex talk about their lives as royals, here is what struck me most: Meghan Markle’s Oprah interview was about connection, not attention. Since becoming a mom for the first time in 2019, I think we’ve all seen that Meghan has been actively vulnerable, or else trying to be, even when she was vilified for it. She was mocked and ridiculed. She carried on.

She’s reaching out to the great void and asking people to see her for who she is: a mom who needs help. I can tell you that you will read a thousand articles telling moms to ask for help and I can tell you as a mom that it is not something we do easily. When we are drowning, as Meghan seemed to be doing, we try to teach ourselves to swim instead of putting on a lifejacket.

So to watch a pregnant mom sit herself down and get truly, deeply, vulnerable in front of 17 million people? This is the thing that took my breath away.

When Meghan married Prince Harry in 2018 she was already a grown, independent woman in her 30s. As she reminded Oprah Winfrey in her interview on Sunday night, she’d been working her whole life. “Thank God I had that life experience,” she said. “Thank God I had known the value of working. My first job was when I was 13 at a frozen yogurt shop called Humphrey Yogart.”

With all of that rich life experience comes connection. In her career, her private life, her charity work. Her dogs and friends. Her mom. After she got married, all of that changed. The royal family has long been famous for its stoicism, its stiff upper lip, its distance from the rest of the world. “Never complain, never explain” is a motto often used to describe Queen Elizabeth’s style in the monarchy.

It’s a motto that originated with British Prime Minister Benjamin Disraeli in the 19th century — a powerful man who had obviously never been a mother, and so perhaps understood little of what that sort of stoicism does to a woman after she’s had a baby. To never be allowed to share, to express how much we struggle, how bone-deep difficult it is to become a mom in regular circumstances, let alone what Meghan was going through, how do we thrive?

Which is rather the point, isn’t it? To thrive. Meghan said as much in an interview for the documentary Harry & Meghan: An African Journey. One of her first public attempts to reach out for some human connection she clearly needed badly. When asked by ITV’s Tom Bradby if she was OK, the new mom looked as though she might cry and answered, “Thank you for asking. Not many people have asked if I’m OK, but it’s a very real thing to be going through behind the scenes.” She went on to say that she believed “it’s not enough to survive, you’ve got to thrive.”

Surviving is something new moms understand; thriving is something else entirely. Thriving happened for me when I found other moms who knew. Who understood me. Who nodded and laughed with me or shook their heads and cried with me when I said I wasn’t managing. I wasn’t thriving. I was barely surviving. Some days with my babies when they weren’t sleeping, weren’t latching, weren’t my little people at all, I was not surviving. And my people, they never told not to complain. They knew, they knew, it was the complaining that was the connecting that was the thriving.

Meghan had those people in her Before life — friends who threw her a baby shower in New York (you’ll remember; she got criticized for it). Friendships developed over years of a life she made for herself by connecting. Not through a stiff upper lip, through stoicism. Not through carrying on and pretending she’s fine even when she’s not fine.

That’s what I think her interview with Winfrey was about: connecting. Admitting she wasn’t fine. Telling her story, because what the heck is the point of this life if you don’t get to tell your story? Especially when you’ve been told for years your story is not allowed to be told. When you’ve been, as Meghan admitted on Sunday, “silenced” by those who were meant to be your champions. “I did anything they told me to do,” she told Winfrey. “Of course I did, because it was also through the lens of ‘And we’ll protect you.’ So, even as things started to roll out in the media that I didn’t see but my friends would call me and say, ‘Meg, this is really bad,’ because I didn’t see it, I’d go, ‘Don’t worry. I’m being protected.’”

She sees it now. Critics of Meghan love to paint her as an attention-seeker, a social climber. I see her as a mom who is pregnant for the second time, living through a pandemic with a toddler. Needing to connect. Needing to be heard. When she was silenced for so long. She is brave enough to be vulnerable, and that kind of courage is so much harder than stoicism.

Brené Brown once said that “cool is the emotional straightjacket.” Perhaps stoicism is the emotional muzzle. Telling Meghan, maybe all new moms, that toughness and silence are more admirable than human frailty.