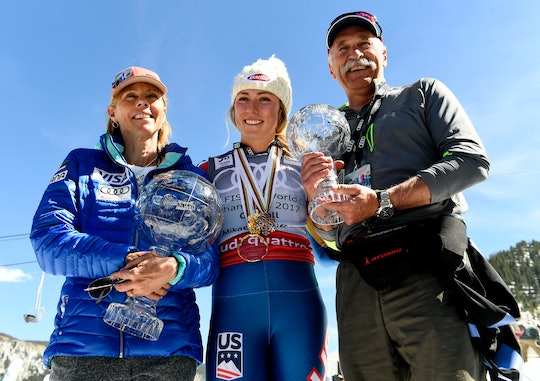 Fortunately for her fans, the 26-year-old gold medalist is competing in her third Olympic Games.

Olympic gold medalist Mikaela Shiffrin is gearing up to compete in the Beijing Winter Games and as with all of the other Olympic athletes, she’ll be going without her family due to Covid-19 safety measures. It will undoubtedly be a challenge for her, of course, but the past two years have most certainly shown Shiffrin and her family that they can handle it. Particularly after tragically losing her father in 2020. But let’s take a look back at where the American alpine skier’s incredible journey began.

She Started Skiing As A Toddler

Shiffrin was born in Vail, Colorado to parents Eileen and Jeff Shiffrin. According to her Team USA bio, the 26-year-old athlete first took to her skis when she was just 2 years old, skiing down her parents’ driveway. She went on to compete in her first World Cup when she was just 15 years old, and has gone on to win five World Championships and three Olympic medals so far.

The family lived in Vail until moving to New Hampshire when Mikaela was 8 years old, but they always managed to find ways to ski together no matter where they lived. Because clearly the family that skis together, stays together where the Shiffrins are concerned.

Her Big Brother Taylor Is Also A Skier

Taylor Shiffrin is also a passionate skier, attending the Burke Mountain Academy, a ski academy in northern Vermont, throughout his high school years. He went on to race for the University of Denver, and in September 2021 married Kristiana Oslund in Vail, Colorado with his family by his side.

Mikaela Shiffrin comes from a long line of skiers.

When Jeff Shiffrin met Eileen in 1985, she hadn’t been on the slopes in years despite her past as a member of her high school ski team. She was a nurse at St. Elizabeth’s Hospital in Boston, and when Jeff, an anesthesiologist, took her on a date, he reintroduced her to skiing at Killington Mountain in Vermont. They married in 1986 and made skiing a central part of their social life.

When they welcomed their two kids, Taylor in 1992 and Mikaela in 1995, they simply took their kids along on the slopes with them. Safely of course. “It was always ‘Follow me’ or ‘Follow Mom,’” dad Jeff told Sports Illustrated in 2014. “They didn’t get a chance to make too many turns without somebody who had an awful lot of interest in their safety and progress teaching them how to do it right.”

Both Eileen and Jeff were always on hand to support Mikaela’s skiing career, always in her corner with her mom managing the World Cup logistics and her dad staying on the sidelines to take photos and make sure their lives ran smoothly. Until tragedy struck in February 2020.

In February 2020, Jeff Shiffrin died after suffering an accident at the family’s Colorado home. The Eagle County coroner told The Aspen Times that Jeff had died of a brain injury. “My family is heartbroken beyond comprehension about the unexpected passing of my kindhearted, loving, caring, patient, wonderful father,” Mikaela wrote of her father’s death in an emotional Instagram post. “Our mountains, our ocean, our sunrise, our heart, our soul, our everything. He taught us so many valuable lessons...but above everything else, he taught us the golden rule: be nice, think first. This is something I will carry with me forever. He was the firm foundation of our family and we miss him terribly.”

It was an especially awful time for the family, losing Jeff just one month before Covid-19 changed the world. Two years later, they are still processing their enormous grief.

After losing her dad, Mikaela believed she might never ski again. “I wondered if it was really worth it," she told TODAY in October 2021. "There was a really long time that I didn’t really feel like it was worth it to care about anything, so it seemed like I’m not going to go ski race again because the most fundamental thing of an athlete is that you have to care about your sport and you have to care about doing well at your sport, and I just didn’t."

Losing one of her biggest fans, her dad, had her questioning her long skiing career. But eventually, she came back to the sport they had loved together. “It’s been a long process to get that motivation and actually the feeling of caring back. A lot more good days than bad now, but it’s still difficult,” she told TODAY.

Mikaela Found Her Own Love On The Slopes

Mikaela Shiffrin’s family has been through a lot.

Last summer, as Mikaela was training to head to the Beijing Olympics, she found a new reason to smile. She started dating Norwegian downhill skier Aleksander Aamodt Kilde after the two appeared in an ad for Oakley sunglasses together. Mom Eileen credited this new relationship with helping her daughter “get to the other side” as she dealt with the loss of her dad. “Aleks is one of the first people who Mikaela enjoyed talking to after Jeff’s accident,” Eileen said in a clip from Mikaela’s new Outside TV’s docuseries. “I loved seeing that because she had been sad for too long.”

After everything Mikaela and her family have been through, they deserve a little happiness. And while they won’t be with her when she competes in Beijing starting on Feb. 6, they’ll all be watching and cheering her on from afar.

More Like This
Serena Williams Is Retiring From Tennis To “Focus On Being A Mom”
Kristin Bell Shared Some Sweet, Rare Photos Of Her Daughters From A Family Vacation
Adrienne Bailon & Israel Houghton Welcome A Baby Boy Via Surrogate
Princess Charlotte Had A "Lovely" 7th Birthday, According To Her Parents