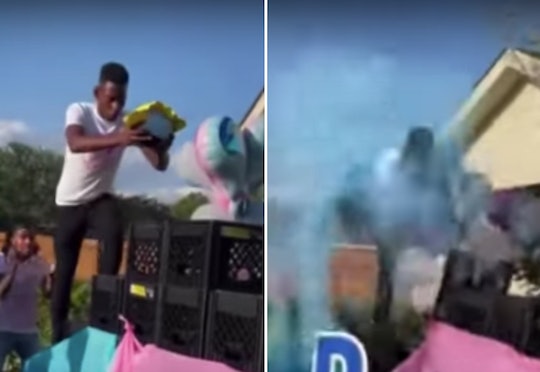 The crossover no one asked for.

The viral and very dangerous milk crate challenge on TikTok apparently wasn’t enough on its own. Now there is a viral video of a milk crate challenge gender reveal making the rounds. Two ideas that have come together that, let’s face it, never really needed to be a thing in the first place.

The milk crate challenge, if you haven’t seen the videos, has people stacking milk crates into a precarious pyramid and trying to climb that pyramid. From the videos I’ve seen, it’s tough to tell whether the goal is to actually make it all the way without falling or falling as spectacularly as possible. Perhaps with a concussion or a broken bone thrown in for good measure. Emergency rooms that are already over-taxed with Covid-19 patients are now seeing people who have been willfully injured in milk crate challenges, and doctors have issued official warnings against it. But that doesn’t appear to be stopping anyone.

In fact, a recent video shared by Podfathers Podcast saw a man carrying a covered bowl during a milk crate challenge gender reveal, merrily toppling over and spilling blue powder to reveal the sex of the baby would be a boy as spectators screamed and cheered him on.

There is now a milk crate challenge gender reveal.

Extreme gender reveals have become a controversial issue on their own over the past few years, with one couple’s explosive reveal in California inadvertently starting a wildfire that consumed over 7,000 acres last September. The milk crate challenge gender reveal might not set anything on fire, but the risk of injury is very real. Depending on how the person falls, they can break bones, suffer concussions or even more severe brain injury injury. “You can open up a textbook, and all injuries are on the table,” Dr. Rajwinder Deu of Johns Hopkins University told USA Today.