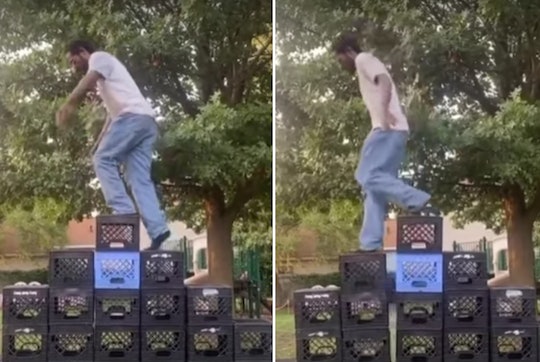 TLDR: It’s not a great idea.

TikTok has given us a mixed bag of tricks over the past year or so. There was the candy challenge favored by celebrity moms like Kylie Jenner and Gabrielle Union. TikTok also gave us the bad news that our side parts and skinny jeans were detestable to Gen Z. But now there’s a new trend called the milk crate challenge on TikTok that is more than a bad idea; it’s actually dangerous. It’s such a bad idea that even the FDA has chimed in.

The trend now has more than 15.3 million collective views, according to The New York Post, and kids on TikTok seem to be embracing the challenge to climb up a pyramid of precariously placed milk crates.

The popularity of these milk crate challenge videos appears to derive from the actual collapse of the Jenga-like structure, which could see people being seriously injured, with possible broken bones, concussions, or other issues from a fall that could land people in the emergency room. Emergency rooms that are already overtaxed with yet another surge in Covid-19 cases and do not need to be dealing with injuries from TikTok challenges that could easily be avoided.

“You can open up a textbook, and all injuries are on the table," Dr. Rajwinder Deu, a professor of orthopedic surgery at John Hopkins University, told USA Today about the milk crate challenge. “Everything depends on your fall, what angle you fall and what part of your body hits the ground first.”

Several milk crate challenge videos on Twitter show just how dangerous it really is for anyone to try, kids especially.

The goal seems to be to make the milk crate period higher and more dangerous with each attempt.

Parents might want to consider discouraging kids from trying the milk crate challenge. It’s especially dangerous at a time when health care workers are stretched to their limits by a pandemic. Exhausted and trying to keep up without people hurting themselves for no apparent reason whatsoever.

TikTok has issued a even statement it, stressing that the challenge goes against the platform’s community guidelines. “[TikTok] prohibits content that promotes or glorifies dangerous acts, and we remove videos and redirect searches to our Community Guidelines to discourage such content,” a spokesperson told People. “We encourage everyone to exercise caution in their behavior whether online or off.”

Even the FDA recommend people just simply have a glass of milk. In a tweet responding to Conan O’Brien joking on Twitter that he was waiting for their approval of the challenge, the FDA said, “Although we regulate milk, we can't recommend you try that. Perhaps enjoy a nice glass of 2% and return all those crates to the grocery store?”