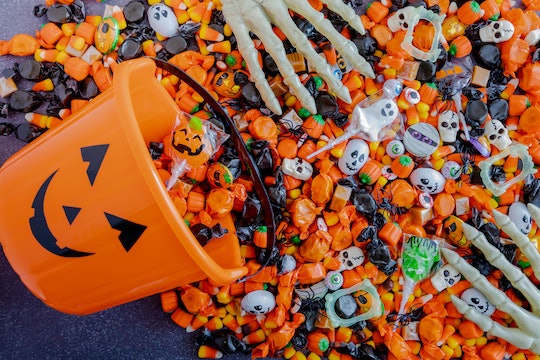 Because candy is serious stuff.

If there’s two things that people feel strongly about, it’s the pride they have in their home states and their favorite Halloween candy. Luckily, Candystore.com has come through with a very official and interactive map to visually display the most popular Halloween candy in every state across the beautiful, sugar-addicted U.S. of A.

Let’s take a look at the hard-hitting research and check out some surprising outliers:

Check out the delicious map.

Also noteworthy: while Reese's Peanut Butter Cups have previously held the title as America’s favorite candy throughout the lands, there is not necessary a shared chocoholism when you break it down further and look at each state individually. Similar to our system of laws, what is true federally might not necessarily follow for the fine folks in Texas, Arkansas, or Alaska.

And for a final sweet moment of candy analysis, here’s a fun cross-reference. According to this handy-dandy chart breaking down the healthiest states in America, the salad-eating people tend to live in Massachusetts, Hawaii, and New Jersey. Therefore, according to the transitive property of yumminess, these healthier Americans probably prefer Sour Patch Kids, Hershey’s Mini Bars, and Tootsie Roll Pops.

While all 50 states will probably never come together to peacefully agree on their favorite candy, there’s still one that that can bring us together — and that’s thievery. Because no matter what’s your favorite treat, we pretty much all steal candy from our kids.