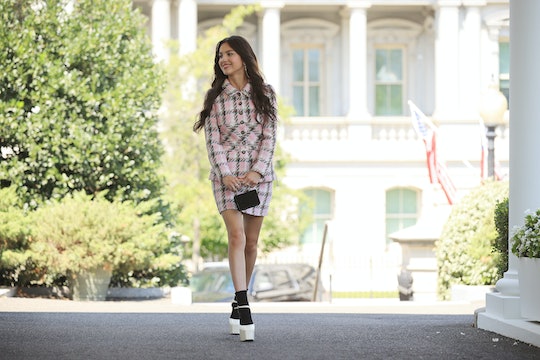 Come on, you know you’ve been singing into your hairbrush.

If your child has started to ask when they can get their driver’s license, chances are they’re a fan of singer and songwriter, Olivia Rodrigo. Honestly, you may be a fan too; the 18-year-old is super talented, and her ballads are catchy and oh-so relatable. And because of her iconic style that’s ‘90s-inspired with a slightly grunge edge, it’s a safe bet that Olivia Rodrigo costumes are going to be everywhere this Halloween.

Rodrigo, who got her start on the Disney channel, released her debut album, Sour, earlier this year, and her songs have been steadily holding spots in the top 10 of the Billboard top 100 chart. In addition to her angelic voice, she’s known for serving major looks in her music videos, at her red carpet appearances, and on her personal Instagram page. And as you’d probably guess, her amazing clothes tend to be one-of-a-kind or custom designer pieces (she also incorporates a ton of vintage and second-hand looks). But that doesn’t mean you can’t recreate Rodrigo’s looks for yourself.

Whether your child wants to channel the star this Halloween, or you and a group of friends feel like dressing like a gaggle of different versions of Olivia, we have costume ideas so you can look just like the singer, no designer pieces necessary.

Fortunately, it’s pretty easy to recreate Rodrigo’s look in her hit song, Driver’s License, which debuted in January at No.1 on the Billboard Hot 100 chart (and became the longest running No.1 hit on the global chart, per Forbes).

2. Olivia Rodrigo at the White House

Olivia Rodrigo visited the White House in style to encourage young people to get vaccinated. She wore a vintage Chanel tweed suit, black socks, and towering Giuseppe Zanotti platform shoes. You don’t need designer pieces to pull of this iconic costume, however.

Deja Vu is the second single off the singer’s debut album, Sour. The music video begins with her looking very retro with a headscarf, vintage sunglasses, layered necklaces, and a simple white tank. This is a costume you can pull together at the last minute.

5. Olivia Rodrigo on the Cover of Sour

The album cover for Sour is instantly recognizable, plus all you’ll need to recreate this Rodrigo look is a bunch of bright stickers, a fuzzy tank, layered necklaces (plus plenty of rings), and maybe a pop of plaid on the bottom.

6. Olivia Rodrigo at the BRIT Awards

The 18-year-old singer channeled her inner prom queen at the BRIT awards wearing a neon green Dior dress with an edgy black belt and shoes. A custom designer dress is probably out of the question, but you or your littlest Rodrigo fan can replicate this bright and fun look.

Rodrigo debuted her Sour Prom concert film via livestream on June 29, and to celebrate, she had a prom-themed party with some friends. As documented on Instagram, Rodrigo wore a vintage Betsey Johnson slip dress and glittery teal platform heels. Don’t forget the corsage and the memorable pigtails when trying this look.

8. Olivia Rodrigo in the good 4 u music video

In the music video for her song, good 4 u, Rodrigo donned a classic cheerleader uniform with some unexpected details like black opera gloves, and cute ‘90s inspired hair clips. Fans of the star will know exactly who you or your kid is dressed in this look.