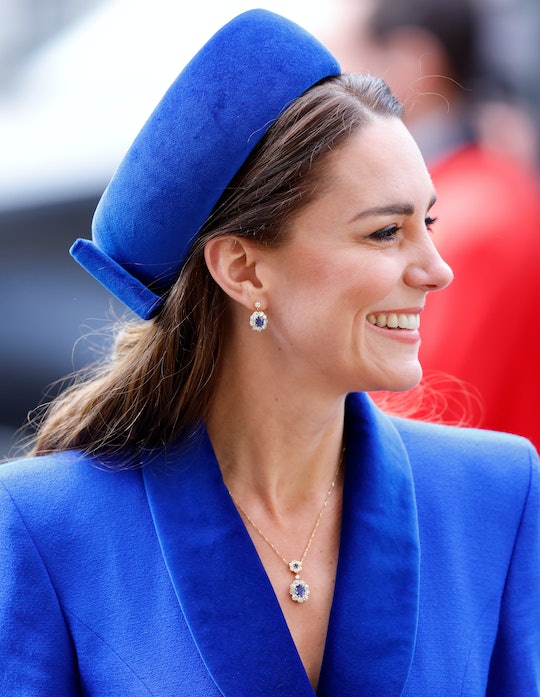 How Kate Middleton Showed Her Solidarity With Ukraine Through Her Jewelry

The entire royal family has voiced support for Ukraine amid Russian’s full-scale invasion.

The royal family is absolutely a unified front in supporting Ukraine. While they rarely speak out about political issues as members of the monarchy, the full-scale Russian invasion of the neighboring country appears to have pushed them all to speak out. From donations to visits with the local Ukrainian community and more, here’s how the royals have stood beside Ukraine.

The Duke and Duchess of Cambridge packed donations

Wearing Ukrainian flag colors of blue and yellow, the Duke and Duchess of Cambridge showed their support of the Ukrainian people during a trip to London’s Ukrainian Cultural Centre. The couple, along with other members of the royal family, have made it clear that they stand with Ukraine amid the Russian invasion ordered by Vladimir Putin on Feb. 24 that continues to see mounting casualties and more than 1.7 million Ukrainians displaced.

The couple got very hands-on at the Ukrainian Cultural Centre, sorting and packing donations for the Disaster Emergency Committee, meeting with Ukrainian Ambassador to the United Kingdom Vadym Prystaiko and his wife.

Middleton and Prince William had previously tweeted their support for Ukrainian people on Feb. 26 at the outset of the Russian invasion, writing, “In October 2020 we had the privilege to meet President Zelenskyy and the First Lady to learn of their hope and optimism for Ukraine’s future. Today we stand with the President and all of Ukraine’s people as they bravely fight for that future.”

Kate Middleton’s jewelry made a statement of support

When Middleton joined Prince William, Prince Charles, and the Duchess of Cornwall to honor Commonwealth Day, she wore a sapphire-and-diamond necklace with matching earrings to match her blue dress. This jewelry choice, as Page Six reported, was the same one she made when she and her husband met Ukrainian President Zelensky during his visit to the UK with wife, First Lady Olena Zelenska, in 2020. It was a subtle sign of her unwavering support for the people of Ukraine.

Meghan Markle and Prince Harry “stand with the people of Ukraine”

Shortly after they issued that statement, Prince Harry voiced his support as they accepted an award at the NAACP Awards. “We would like to acknowledge the people of Ukraine who urgently need our continued support as a global community,” Prince Harry said.

During a visit to the Ukrainian Catholic Church in London, Prince Charles made it clear that he did not support Putin’s attack on Ukraine. In a speech at the church, where he met with Ukrainian people holding “Stop Putin” signs and even accepted one from a little girl, Prince Charles praised the “extraordinary bravery, generosity and fortitude of the Ukrainian community in the face of such truly terrible aggression,” per ITV News.

Prince Charles visited asylum seekers finding refuge at St. Luke’s Church in London, where he reportedly got emotional while speaking to a Ukrainian man whose daughter fled Kyiv ahead of the invasion. “He was very open and there were tears in his eyes. I was really impressed by him,” Andriy Kopylash told The Mirror.

Prince Charles and Camilla, Duchess of Cornwall also brought sunflowers, which are the national flower in Ukraine, to the Ukrainian Catholic Cathedral to say a prayer for the people of that country.

In a recent Instagram post, First Lady Olena Zelenska share her gratitude for the entire royal family along with a “special thanks to Her Majesty the Queen of Great Britain,” who Zelenska said “made a private contribution to help Ukraine.”

The royal family stands with Ukraine.

Queen Elizabeth’s “generous” donation was given to the Disasters Emergency Committee Ukraine Humanitarian Appeal, Buckingham Palace confirmed with The Sun, although no word on how much she donated. It is worth noting that Queen Elizabeth rarely involves herself in the kind of political commentary such a donation infers, but it seems the humanitarian crisis in Ukraine moved the 95-year-old monarch to do so.