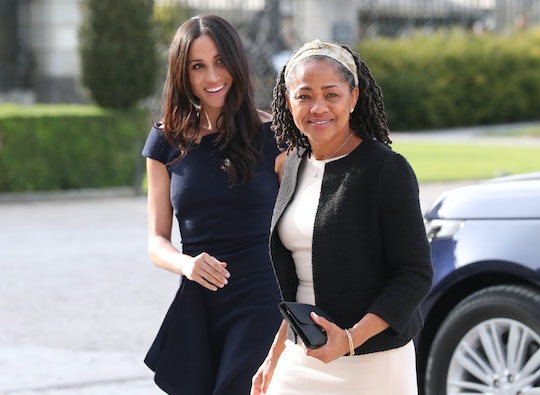 “My mom's here with us tonight, and we all feel very proud.”

On Sunday, Prince Harry and Meghan Markle were honored at the 53rd annual NAACP Image Awards and they brought a special guest to celebrate. The Duchess of Sussex’s mother, Doria Ragland, joined the royal couple as they accepted the NAACP’s President’s Award, for their ongoing commitment to public service and got a sweet shout-out from her daughter.

“My mom's here with us tonight, and we all feel very proud,” Meghan said at the end of their acceptance speech. Ragland was breathtaking in a sleek black dress from Burberry with black pointed-toe heels, while her daughter was equally glowing in a blue gown by Black designer Christopher John Rogers.

Prince Harry also spoke on Sunday, praising his wife as “incredible” in his acceptance speech. “I think it's safe to say that I come from a very different background than my incredible wife,” he said. “Yet our lives were brought together for a reason. We share a commitment to a life of service, a responsibility to confront injustice, and a belief that the most often overlooked are the most important to listen to.”

Despite Meghan and Harry’s fame, Ragland has kept a low-profile but a prominent presence in her daughter’s life since she married Prince Harry and entered the British royal family in May 2018. The 65-year-old has helped care for her grandson, Archie Harrison, and stayed with the couple at Frogmore Cottage. She also photographed the image that inspired the Sussexes’ 2020 Christmas card, Hello! reported.

When the couple stepped down as senior working royals, Ragland was reportedly “delighted,” and “relieved her daughter is putting her mental health and wellbeing first,” according to UK outlet, Express.

Ragland is a yoga instructor and social worker in Los Angeles. Considering how close the Sussexes are, there’s no doubt the grandmother gets to spend a lot of time with her daughter, son-in-law, and two grandchildren, Archie and Lilibet, in California.

Though Ragland isn’t in the spotlight much, it’s not a surprise that Meghan brought her to such an important event. “[Meghan] definitely gets a lot of her strength from her mother,” a source told People shortly after Meghan and Harry announced their exit from their senior royal roles. “She and Meghan are so close. Harry really gets on well with her too. Any new mom wants her own mom around at this time, so it’s great.”

Regarding the NAACP award, Ragland is undoubtedly proud of Meghan and Harry. This prestigious award isn’t just given to anyone. Past recipients have included Muhammad Ali, LeBron James, Colin Powell, Condoleezza Rice, Jesse Jackson, Soledad O’Brien, Rihanna, and JAY-Z.

The Sussexes have also partnered with the NAACP to create the NAACP-Archewell Digital Civil Rights Award, which will honor people creating change in the areas of social justice and technology — to advance civil and human rights. Honorees will be awarded a $100,000 stipend to send on their work.