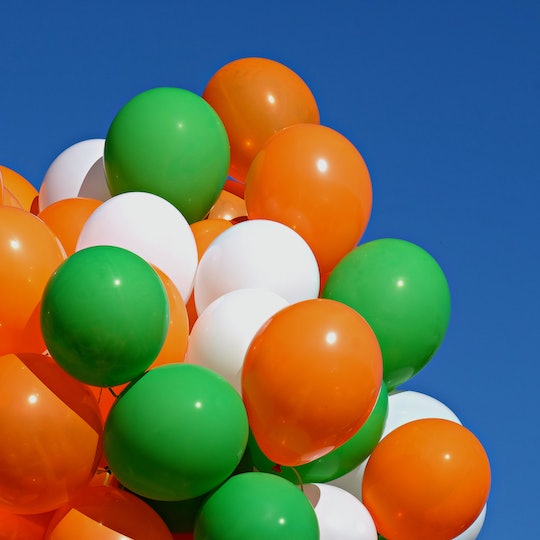 This Used To Be The Official Color For St. Patrick's Day

Because it wasn't always green, you know.

For you, it’s not enough to simply celebrate a holiday. You want to show up wearing a festive frock that matches the mood (and colors) of the occasion, too. And St. Patrick’s Day (with its shamrocks, leprechauns, and lucky clovers) is certainly no exception. But as you’re going through your closet to pick out an outfit for the shenanigans, you’ll need to know the St. Patrick’s Day colors, because shockingly, it wasn’t always green.

Many holidays have certain colors that are symbolic of the festivities. Easter has its pastel pinks and blues. July 4 has red, white, and blue. Halloween is all about orange and black. So, of course, you might question what the real color of St. Patrick’s Day is, especially if you’re dressing up your child for an in-school party, or want to hit up your local parade — and see all those kilt-clad men tooting their bagpipes. And that’s why it might surprise you that green hasn’t always been the St. Patrick’s Day color — it used to be blue.

That’s right, forget about Kerry green. It’s a light blue that is the original color representing St. Patrick. A big part of that has to do with the fact that earliest depictions of St. Patrick showed him donning blue garments… and not green, according to IrishCentral.com. In fact, in 1783, George III (who was King of Great Britain and Ireland), decreed an order of chivalry for the Kingdom of Ireland, which was then known as the Order of St. Patrick. It’s official color: sky blue.

For a while, the Irish were true blue to using the color blue as a symbol of St. Patrick. It wasn’t until the 1798 Irish Rebellion that things began to change, per Time. Wearing a clover symbolized patriotic nationalism, and wearing green soon became standard practice which included uniforms as well. Of course, it doesn’t hurt that Ireland is also lovingly known as The Emerald Isle. So in many ways, it was inevitable that blue became replaced by green.

These Are The St. Patrick’s Day Colors Today

If you’re going to a St. Patrick’s Day themed gathering today, well, you’d better get your green on, because it is the most acceptable color to wear on March 17. That said, it’s not the only color you can don, though. In keeping with the colors of the Irish flag, you can always break up the green with some white and orange as well. Sure, if you’re not careful, you could potentially look like an Oompa Loompa, but it’s a small risk for showing off that Irish pride.

And there you have it. Although blue was the color to wear on St. Patrick’s Day in the past, today, everything (from the clothes you wear to the beer you drink) should be green in honor of the patron saint of Ireland. Sláinte!