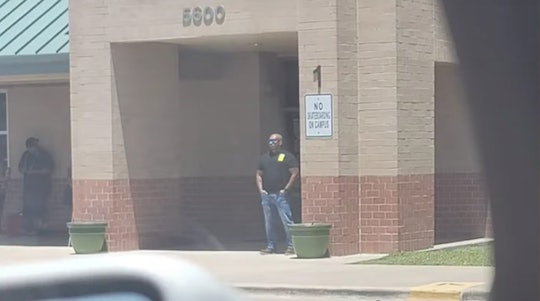 “This is just a testament to the sleeplessness caused by the grief I experienced.”

Texas father Eddie Chelby made a decision in the wake of the horrific school shooting at Robb Elementary in Uvalde, Texas. He reached out to the school superintendent to ask for permission to stand guard outside his son’s elementary school, where his wife also works, in an effort to protect his family.

Last week, 19 children and two adults were murdered at Robb Elementary School in Uvalde, a small community that has been in a state of shock ever since. Chelby, whose wife is a nurse at Saegert Elementary in Killeen, Texas where their son also attends school, told news outlet KWTX that he “couldn’t sleep” after hearing word of the shooting. And so he took action.

He was given permission, and stood outside the school ensuring anyone attempting to gain entry is meant to be there.

Chelby, who is a veteran, lives across the street from Saegert Elementary and has received a positive response from his decision to provide unarmed security for the school. “A child should never have to worry for their safety as they come into school and Mr. Chelby helped ensure that sense of security the last two days of school after a horrific tragedy,” Saegert Elementary Principal Eli Lopez told Newsweek.

Chelby told KWTX that people have been offering to bring him snacks and drinks and one woman even joined him. “I had a lady named Constance come out and help me. She was a parent of one of the students here, and she’s like, I got your back, you know, and literally took the backside of the school,” he shared with the outlet.

Chelby’s plan was to protect the students for the last days of school so that parents and kids could enjoy this special time in peace. “I’ve had a lot of emotional people come up to me,” Chelby told KWTX. “They didn’t want to send their kids to school. They struggled with sending their kids to school. And I told them, I was like, ‘I got them.’”

It is, of course, heartbreaking that any parent feels the need to protect their child inside their own school. But the shooting in Uvalde, where 19 children were killed and two teachers died trying to protect them even as law enforcement stood outside the building waiting to go in, has naturally left everyone rattled.

Thankfully there are people like Chelby who have decided to take action. The best kind of action.

More Like This
Robb Elementary School Is Set To Be Demolished After Deadly Shooting
Ketanji Brown Jackson Spoke Directly To Her Daughters In Her Powerful Opening Statement
Can States Ban The Abortion Pill? FDA Rules May Make That Hard
Here’s How To Fight For Abortion Rights