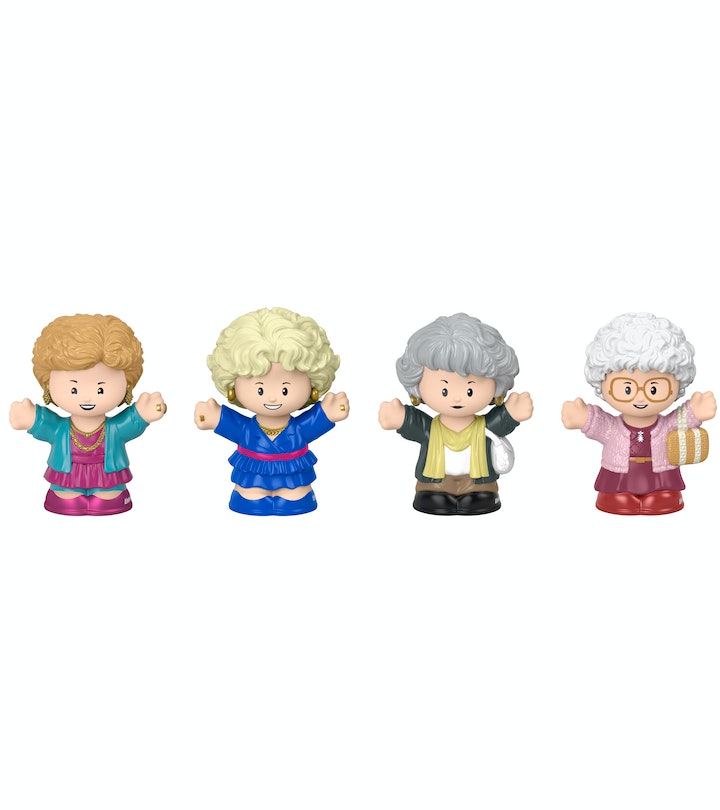 Take These Little People Out On The Lanai With Some Cheesecake

And thank them for being a friend.

If you threw a party and invited everyone you knew, you would see the biggest gift from me, and the card attached would say, “OMG I got you The Golden Girls Little People set, you’re so welcome!” Also, maybe, thank you for being a friend.

You guys. Every family’s favorite toy — a collection of Little People to shove in their barns, school buses, and airplanes with very catchy tunes — has expanded in big ways to include pop culture icons. Last year, The Office set blew me away, as did the one of The Beatles (which I gave my dad for Christmas and he still won’t let any of his six grandchildren touch them). But now? Now there’s an entire The Golden Girls Little People collection and I am just overwhelmed. Pass the cheesecake.

The set includes all four of The Golden Girls: Blanche, Rose, Dorothy, and Sophia. And each of them are impeccably detailed. From Sophia’s wicker handbag to Dorothy’s scarves and Blanche’s jewel tones, they look exactly like a kid-sized version of your favorite lanai-lounging ladies. They also come beautifully packaged in a box that you could put on display, whether in your own space or your kid’s area. I’m obsessed with the quotes on the front of the box and the perfect living room in the background.

These are so nice, I’ll have to say it thrice: go grab you a set. They’re available at Target and Amazon for just $19.99 and would make the sweetest gift for a friend who loves The Golden Girls, or the four little playmates for your own kids. I mean, maybe there’s way too much adult talk with the gals to warrant a viewing with your little toddlers at the moment (“Condoms, Rose! Condoms!”), but in time, they’ll know all about Miami’s finest ladies. Picture it: You’ve got episodes where Blanche has to stand up for herself, episodes where Rose overcomes a big fear, episodes where Dorothy takes control of her life, and episodes where Sophia gets mega-vulnerable and shares her deep truth. It’s a show meant to make you feel good, one that reminds you to always rely on those closest to you.

Even if they’re only a couple of inches tall.