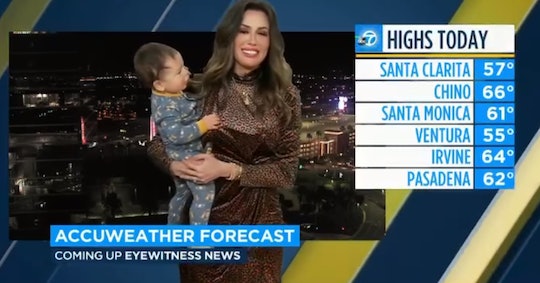 "He's walking now guys, I have no control."

A viral video of a sweet little baby interrupting his mom giving a weather forecast is currently charming folks everywhere on Twitter. Firstly, because it's adorable, of course, but also because ABC7 Los Angeles morning meteorologist Leslie Lopez's reaction to her son's surprise cameo was a hilarious peak working mom moment.

Between her baby boy and work, Lopez's mornings are busy, delivering three weather forecasts before 6 a.m. As if this wasn't impressive enough (because some of us can't even imagine having to speak at all so early in the morning let alone get dressed and report on the weather), Lopez is currently delivering those reports from her home, where she is also raising a new baby, 9-month-old son Nolan, who has apparently become surprisingly mobile recently.

On Thursday morning, little Nolan made a guest appearance during his mom's weather forecast by casually crawling into the room and using her leg to pull himself up as she laughed. Lopez explained in the video, "It looks like there's a baby down below," before continuing her forecast like a champ and picking up her son. "He walks now guys, so I've lost all control," Lopez told her viewers.

"Mr. Friday made a surprise appearance this morning," Lopez captioned the video on Twitter.

Nolan's appearance was a hit on Twitter, with fellow parents sharing their joy at seeing working moms represented on television. Like this parent who tweeted, "This was a joy to see. The pandemic has been rough but the time with my kids has been amazing. They’ve talked to my customers and my customers have gotten to know them and my dog and it’s made work a lot more fun. I’m glad you get to work and have him be apart of it."

Lopez being interrupted by her son during the news is not the first example we've seen. During the pandemic, there have been several parents working from home who have been interrupted during a news call, like this mom whose daughter crashed her BBC interview. In 2017, before the pandemic, father of two Professor Robert Kelly kicked off the trend of adorable kids wandering in the room during an interview, again with the BBC. Little did we know then how COVID-19 would make this a regular occurrence for so many. And as one delighted viewer tweeted, "Please let this part of Covid never go away."

The balance of work and family has gotten so much harder for parents during COVID-19, especially moms who have been losing jobs at an alarming rate in recent months. Leslie Lopez and her son Nolan in this video are a great example of how a career and motherhood should be able to co-exist. Interruptions happen. Laugh it off. Carry on.