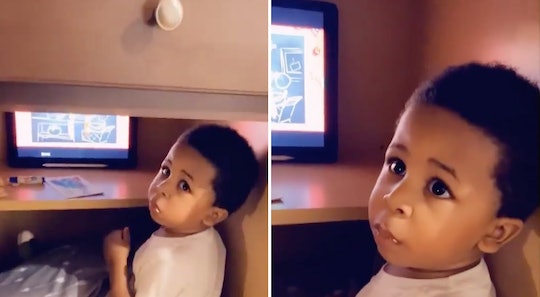 A stash for crackers and an iPad for cartoons? Sounds like the ideal toddler man cave.

Quarantine has given one toddler time to find a new and unique place to hide his snacks and clock in a little "me time." Meet Noah Walker, a clever little toddler whose hiding spot in a cabinet has gone viral after his mother discovered where the tot has been keeping his crackers and watching cartoons.

The adorable reveal was captured on video by his mother, Blair Monique Walker, as she walked to the basement, opened the cabinet door, and found little Noah inside. The toddler had apparently turned the cabinet into his very own little man cave — complete with an iPad, coloring books, and crackers!

“What are you doing in here, bud?” his mother asked him in a video shared on her Instagram, @blairmonique, which has been liked over 139,000 times. Noah turned around and looked at his mom with a mouth full of crackers. He didn't respond. Instead, he turned back around to watch cartoons on his iPad. When she teased and asked Noah if she was disturbing his peace, he nodded and waved his hand as if to say "Yes, yes you are. Goodbye."

Walker, who is also a gospel singer and CEO of a graphic design company, BMoDesigns LLC., told the TODAY Show that Noah takes after his father who is an introvert. “He’s been this way since he was a little baby. He just likes relaxing in little spaces," she told the outlet. "We’d find him under the table.”

Walker shared that people have reached out concerned about Noah's safety, but she stressed that he is always watched. "Someone is always down there in the basement with him," she told TODAY. "I don’t want anyone to think he’s not safe.”

Meanwhile, while everyone else is trying to figure out how to replicate his hiding space, Noah has picked up quite a fan base and has also garneded some media attention. The little boy has been featured on The Wendy Williams Show, Oprah Magazine, and Entertainment Tonight. Who knew chilling in a cabinet and munching on crackers could bring so much fame? (Noah, apparently.) Thankfully, you can keep up with the toddler's adventures on his Instagram page, The Suite Life of Noah, and on his YouTube channel.

No official word on whether Noah still eats his crackers in the cabinet these days, but according to a new video shared by his mom in December, he may have found a new hangout spot in his bedroom dresser...

More Like This
Viral Reddit Post Asks If A Toddler Can Watch Cartoons Without Headphones On A Plane
"Corn Kid" Handed Out Over 40,000 Cans Of Corn At A Food Bank Ahead Of Thanksgiving
Over 10,000 Sippy Cups & Bottles For Toddlers Recalled Due To Lead Poisoning Hazard
Hero Who Tackled Colorado Gunman Was At Nightclub With Family To See Drag Show