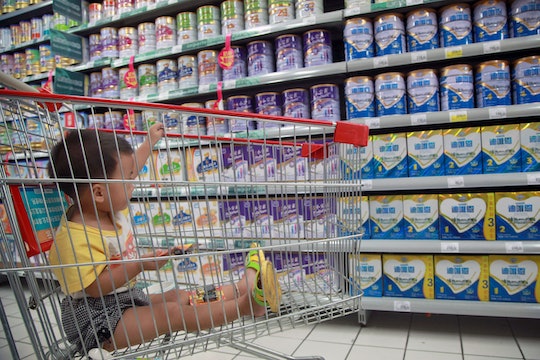 A former Walmart greeter has gone viral on TikTok after outlining exactly why he didn’t report moms who stole items like diapers and baby formula from the store. While he was technically expected to stop these women, he simply told them to “have a great day” and sent them on their way. Why? Because “kids are expensive in general” and he had a lot of empathy for these customers, most of whom were women, who simply couldn’t afford those items.

Brandon Tamayo shared a video on TikTok recently to talk about his former job as a Walmart greeter. “Basically a door greeter who says ‘hi’ and ‘bye’ and also checks your receipt before you leave the store,” he explained. “Every time I saw a customer, mostly a woman, when I checked the receipt and I saw Pampers or baby formula that was not on the receipt, I just said ‘have a great day.’”

Tamayo admitted that he didn’t stop these women because he knew these items were expensive, and even when he was told by supervisors “she’s stealing, catch her, check the receipt” it didn’t stop him from letting these moms leave with their necessities for their babies. He would simply check the receipt and say, “You’re good, have a great day,” despite the possible repercussions.

Tamayo’s video stitched one shared by TikTok user @commlion, who made a similar point. “People steal baby food and other essentials because they’re in need,” she noted. “This is a societal failure, not an individual one. If you see anyone stealing; no you didn’t.”

Both are right about diapers and formula being expensive. The average household with one baby will spend close to $1,000 on diapers during the first year, according to the American Academy of Pediatrics, while formula will run between $70 and $150 per month. And that’s with just one baby. Considering little ones tend to be in diapers until they’re around 3 years old, parents might be spending double or triple that number, depending on the age of their children. Add to that the fact that more than 37 million Americans are living below the federal poverty line, according to The Los Angeles Times, it’s easy to see why some families might be desperate enough to steal diapers and formula simply to get by.

This TikTok user’s decision to simply let these struggling moms go is in sharp contrast to that of the NYPD, who came under fire in February for a since-deleted tweet about arresting shoplifters who stole diapers and cough drops.

Social media had a very different response for Tamayo. “We need to nominate you for the Nobel peace prize,” wrote one follower while another added, “You’re an angel I would do the same some moms just can’t afford it and can’t get gov help.”

In a perfect world, no parent should ever be put in a position where the only way they can afford necessities for their babies is to shoplift. For any parents in need trying to deal with the huge cost of diapers, there is the National Diaper Bank directory that can help families find assistance.

More Like This
This Underwear-Clad Mom Saved Her Pet Goose From An Eagle While Breastfeeding
This Mom Gave Birth On Graduation Day, So The University Brought Her Degree To Her
Please Stop Telling Moms To Breastfeed As Baby Formula Shortage Worsens
Model Hunter McGrady On Being 6 Months Postpartum In Latest 'SI' Swimsuit Edition