Dibs On The Remote 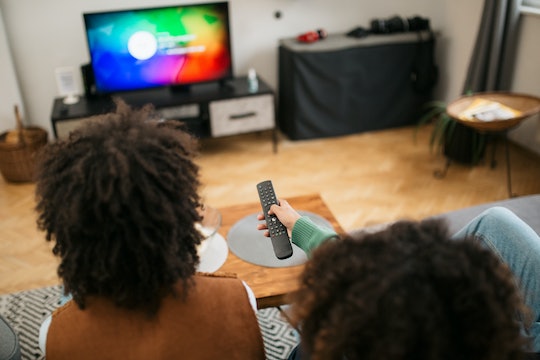 Watching TV With Your Kids Can Actually Be Beneficial For Them, New Research Says

So we can all stop feeling guilty about, OK?

It’s one of the great guilty pleasures of parenting; hunkering down with your kids after a long day to watch television. Or perhaps not as guilty as we once thought. According to a new study that is bound to make many parents feel terrific, watching television with your kids is actually beneficial. So everyone put on your sweats and reconvene in the living room because we’re all off the hook.

Researchers from the University of Portsmouth and Paris Nanterre University, France published findings from 478 studies over the last two years about the early exposure to television in Frontiers in Psychology. While the researchers concluded that too much exposure to screens at an early age can be detrimental to development, they also found that some screen exposure can be beneficial, depending on the context. According to one researcher from the study, Dr Eszter Somogyi from the Department of Psychology at the University of Portsmouth, the presence of an engaged family member who talks about what’s on screen and asks questions can be a positive thing for children.

“Families differ a lot in their attitudes toward and the use of media,” explained Dr Somogyi in a press release. “These differences in the viewing context play an important role in determining the strength and nature of TV's impact on children's cognitive development. Watching television with your child and elaborating and commenting on what is viewed can help enhance their understanding of the content, reinforcing their learning during educational programs.”

This research backs up a 2021 article in Child Mind Institute which also pointed to the benefits of actively watching television with your child. The key seems to be engaging with kids while watching television; asking open-ended questions, finding teachable moments, and using that time as a bonding experience for the whole family.

Fellow researcher from the Department of Psychology at Paris Nanterre University also pointed out that parents and caregivers should be cautious about using technology as a “complement” to social interactions rather than a replacement. “I think the most important challenge of our societies for future generations is to make adults and young people aware of the risk of an unconsidered or inappropriate use of screen-use. This will help in preventing situations in which screens are used as the new type of child-minding , as it has been during the pandemic lockdowns in different countries.”

Perhaps it’s time to let go of some of that guilt about watching television with your kids. In fact, I would go one further. I would add in some food because eating in front of the TV is the best, but that’s just my advice.

More Like This
The 35 Top Toys For 3-Year-Olds
How To Handle It When Someone Criticizes Your Parenting
New Study Finds Brains Of Teens Who Lived Through The Pandemic Aged Faster
How Old Should Kids Be Before They Watch The 'Christmas Story' Sequel?