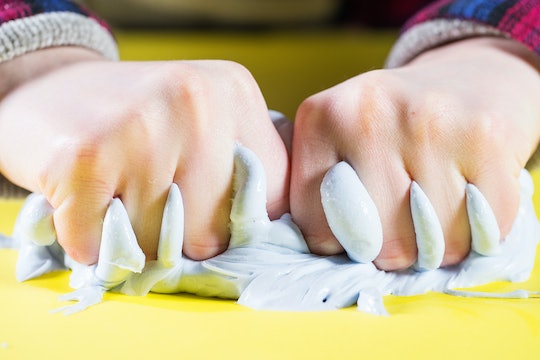 How To Fix Slime That's Too Runny, Because It's Simply Unacceptable

There a couple of fixes.

Maybe this is something that all parents go through, but I genuinely feel like my child has way more things to keep him entertained than I did growing up. It's like every other minute there's a new trend or food-related challenge that my son insists he "needs" to do. One of the latest crazes many children have gone seemingly gaga for is creating your own gunk aka slime — the stretchier, the better. But if the ingredients don't quite come together as they should, then you'll want to know what to do when your slime is too runny or sticky. You'd be surprised just how easily the final product can be affected by the slightest change — specifically, a tad too much or just not enough of a key component.

If you're not too familiar with the basics of the mega DIY trend of making your own slime, then you'll be relieved to know that the fix is actually pretty simple. First, what makes slime work? If you’re working with a standard mix of glue, water and borax, the American Chemical Society (ACS) breaks it down into more technical terms on the association's official site: Basically, the polymers in glue are long, flexible molecules that slide past each other as a liquid. Borax helps the polymer molecules link up so that they’re not so slippery, and that’s why it changes from a runny consistency to a rubbery one. Herein lies the necessary steps to ensuring your slime isn't too thin.

So, how do you fix thin, watery slime, which also likely feels too sticky to the touch? You might be able to hazard a guess, given the previous explanation of how slime works. It seems that the glue solution needs enough borax solution to become thicker. Basically, your slime is runny because there is not enough borax, or some other type of polymer, to activate the thickening process.

“If your slime is too runny and/or too sticky, you would need to reactivate it to bind the molecules of the glue back together,” Karen Robinovitz, co-Founder of The Sloomoo Institute (a slime-themed experience in New York City) tells Romper via email. She explains what you should do in a sticky (or in this case runny) situation. “We use 1 teaspoon of borax, mixed with 1 cup of hot water (stir until fully dissolved). Only add a little bit at a time and work the activator through the slime. If you add too much at once, you may over activate the compound and it will become hard. If that happens, add a little glycerin or lotion,” she explains.

On the chance that you don't want to use borax in slime, there are other concoctions you can create using other ingredients like eye contact solution and baking soda. If you're a visual learner like I am, then you're in luck. You can check out Fun With Mama’s YouTube video demonstration below for a slime solution that's both simple and quick.

You can immediately tell that the solution of borax and water changed the consistency of the glue and water mixture almost as soon as it was squirted on the runny mess. I am by no means the domestic type, but even I have found that adding more of an activator to slime that feels too sticky or runny truly works. And if I can seem like the superhero who rescued my kiddo's slime fail, then you certainly can, too.

If you find the texture of slime a little… disturbing… you can always switch up your kid's go-to formula with something that will reduce the ick factor a bit. For instance, my son and I love to add kinetic sand to slime for a less gooey version. And there's always fluffy slime. Before you dismiss your little one's latest fad, think back to when you were their age. In fact, you probably played with similar creations in your school days, but it likely had a different name. For me, it was all about Gak and Floam as a '90s kid. But the benefit there was that these gross and gooey gobs came pre-made — which meant you rarely had to make adjustments yourself to achieve the desired texture.

At the end of the day, there's really no right or wrong way to make and play with slime. And if you and your kid want to fine tune your gooey ratios, then that's cool, too. In a way, I think that's what makes the whole slime creating process so great: You can have just as much fun creating something as you can with the end result. Enjoy the mess.

This article was originally published on April 13, 2018