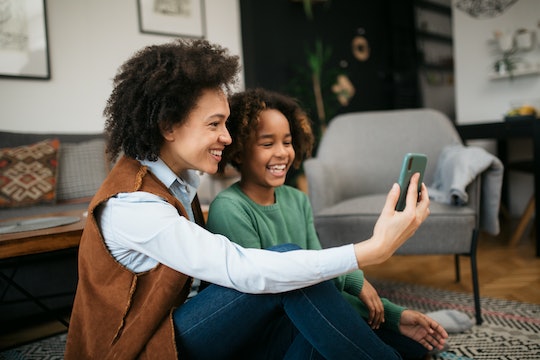 Here's Everything You Need To Know About Mother's Day, 2021

Although it’s only just beginning to feel like spring, it’s never too early to grab a calendar and confirm the upcoming holidays, chief among them Mother’s Day. Whoa to the person who forgets to send some love to their mama, or MIL, or grandmama. You get it. So when is Mother’s Day this year in 2021?

It’s coming up soon. Though still more than a month away, we all know how things go. One minute you’re cleaning up your kid’s leprechaun trap and the next it’s May and you’re frantically trying to figure out how to overnight a bouquet of flowers to your mom. Takeaway: It pays to plan ahead.

The History of Mother’s Day

It was 1908 when Anna Jarvis officially began Mother’s Day in America, according to History.com. As it turns out, Jarvis’ bold idea was seen as a folly and generally laughed at. But she kept pushing and in 1914 US President Woodrow Wilson officially signed Mother's Day into existence. That said, apparently Jarvis grew displeased with the commercialization of her holiday in later years and actually fought to have it removed from the calendar, according to Mental Floss.

Celebrations of moms had been around for ages before that. Festivals of the mother goddesses, Rhea and Cybele, were held in Greek and Roman cultures. In the 16th century, Mothering Sunday appeared. This was actually an event related to returning to one’s “mother church” and was celebrated on the fourth Sunday of Lent, UKTV reported. The event, which fell out of popularity in the 20th century, eventually evolved into Mother’s Day in the United Kingdom.

Probably the two things moms want most on Mother’s Day are 1) time with their family or 2) time off from their family duties. So why not make it a combo of both?

If you can manage to be with your mom in person, this is the year to do it. For some, the benefit of vaccines means social distancing restrictions have eased and in person gatherings can happen. But if you’re still operating at a distance from loved ones, there are meaningful ways to celebrate mother's day virtually. Give her some face time even if you can’t be in the same room, with some FaceTime.

Otherwise, take a load off your mama. Treat her to a duty-free day where all of your regular chores are lifted. Or buy her a spa visit, pedicure, or some other kind of stress-relieving service.

And if you’re looking for ideas to celebrate a new mom in your life (because *ahem* it’s a really big deal), listen to her about how she’d like to mark this new tradition. As new mothers quickly discover, the pressures to succeed in the business of bringing up babies are many and nowhere is that more obvious than in the first few months on the job. So get her take on how she’d like to treat the big day. All will be happier for it.