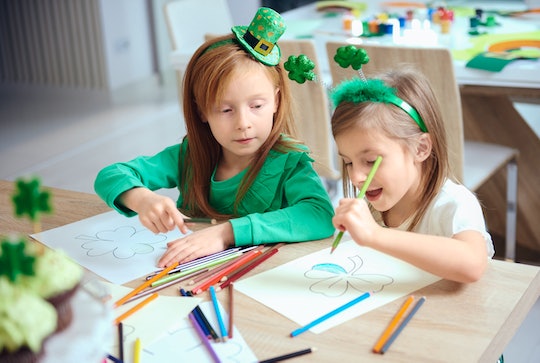 When Is St. Patrick's Day 2022? It Falls On This Day Of The Week This Year

It’s when Irish eyes will be smiling.

If you think about it, there are so many holidays that celebrate using the color green. Christmas is comprised of red and green colors, Kwanzaa symbolically displays black, red, and green shades, and even Easter is known for its pastel greens. Still, there is no green greater than the kelly green that you’ll see everywhere on St. Patrick’s Day. But if you’re looking at your calendar and wondering when St. Patrick’s Day 2022 is, welp, get ready to shake your shamrocks, because the holiday will be here before you know it.

Despite originating from the gorgeously green Emerald Isle, St. Patrick’s Day doesn’t have that luck o’ the Irish as to when it lands on the calendar. Because for being such a spring-esque holiday, St. Patrick’s Day almost always falls a wee bit short of the first day of spring. And that means that celebrating the holiday often happens when it’s still winter, and there can be snow and ice on the ground. Still, that’s nothing for those who want to celebrate the special day that is so meaningful to those hailing from Ireland, or really everyone, since as the saying goes, everyone’s Irish on St. Patrick’s Day.

But when exactly can you expect to be saying, “Lá Fhéile Pádraig sona duit!” (which means “Happy St. Patrick’s Day to you!” in Gaelic)? Well, this year, St. Patrick’s Day 2022 falls on a Thursday. In case you were curious, St. Patrick’s Day has been celebrated for over 1,000 years in Ireland, per History.com. It commemorates the death of St. Patrick, the patron saint of Ireland who was credited for bringing Christianity to the country. It’s believed that his death fell on March 17, 461.

Ironically, St. Patrick wasn’t Irish at all; he was born in Britain and brought as a slave to Ireland when he was 16 years-old. There are many legends surrounding St. Patrick, including an incident where he drove the snakes out of Ireland, according to National Geographic, or his ability to raise people from the dead. No matter what you believe, though, there’s no denying that St. Patrick is incredibly important to the people of Irish heritage, both on the Isle and abroad.

That’s why there’s no time like the present to start prepping for St. Patrick’s Day. Maybe you’ll go to a parade, or do some fun St. Patrick’s Day crafts with your kiddos. Or heck, maybe you’ll just raise your glass to Ireland’s patron saint and drink some green beer in his honor. Despite being a day that commemorates his death, it’s a fun holiday to get all gussied up in green, laugh, and be together as a family. And as the Irish expression goes, may the road rise up to meet you, on St. Patrick’s Day and always.